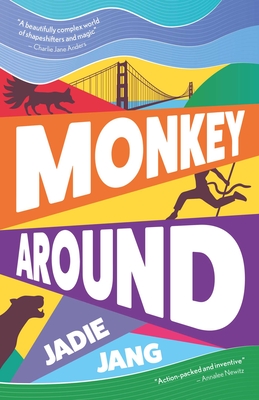 The debut novel from Jadie Jang is an action-packed urban fantasy delivering a bold new take on the Monkey King in San Francisco - complete with murder and mayhem!

San Francisco has a Monkey King — and she's freaking out.

Barista, activist, and were-monkey Maya McQueen was well on her way to figuring herself out. Well, part of the way. 25% of the way. If you squint.

But now the Bay Area is being shaken up. Occupy Wall Street has come home to roost; and on the supernatural side there’s disappearances, shapeshifter murders, and the city’s spirit trying to find its guardian.

Maya doesn’t have a lot of time before chaos turns up at her door, and she needs to solve all of her problems. Well, most of them. The urgent ones, anyhow.

But who says the solutions have to be neat? Because Monkey is always out for mischief.

Claire Light (writing as Jadie Jang) is almost as organizy as her characters. She started a magazine (Hyphen) and an arts festival (APAture) with a cast of Asian Pacific Americans even more magical, if less supernatural, than the ones she writes about. She also got an MFA, went to Clarion West, and compromised between the two by publishing a collection of “literary” sci-fi short stories (Slightly Behind and to the Left) that maybe 100 people read. After wrangling arts and social justice nonprofits for 17 years, her already autoimmune-disease-addled body threw a seven-year-long tantrum, leading our then-house-bound heroine into an urban fantasy addiction. A few years, and a dozen Euro-centric-mythology-dominated urban fantasy series later, Claire sat up and said “I can do this!” and Jadie Jang, the part of her brain that writes snarky-fun genre romps, was born. She posts about monkeys every Monday under @seelight on Twitter.

"Action-packed and inventive, Monkey Around is the magical realist detective story we've all been waiting for. Jadie Jang tells a powerful story of immigrant communities living in the space between supernatural and political worlds--and it's a hell of a lot of fun, too.” -- Annalee Newitz

"Maya McQueen—activist, sleuth, shape-shifter—investigates a spate of murders and disappearances in a San Francisco lushly populated by supernatural creatures. Jadie Jang delivers a spellbinding and action-packed thriller in this brilliant twist on the legend of the Monkey King." -- Lauren McLaughlin

“A glittering shapeshifter of a novel that takes you where the modern city and post-modern magic meet.“ -- Terry Bisson, author of Bears Discover Fire

"Pure fun to all sentient beings and to those that aspire to be." -- Ed Lin, author of David Tung Can't Have a Girlfriend Until He Gets Into an Ivy League College and Motherfuckerland

"This hilarious take on the Bay Area and the Asian American community in the 21st Century filled me with pure joy." -- Naomi Hirahara, Edgar Award-winning author of the Mas Arai and Leilani Santiago mysteries

"As delightful, nimble, and unpredictable as its namesake, Monkey Around is phantasmagoric in every sense of the word." -- Scott Westerfeld, author of Uglies and Impostors

"Hooray to Jadie Jang for creating characters we’ve been waiting for! Monkey Around is action-adventure poetry." -- Andrea Hairston, author of Master of Poisons

"As nimble and spirited as its were-monkey protagonist, Monkey Around is a wild romp through evocatively portrayed post-financial collapse San Francisco." --Molly Tanzer, author of Vermilion and Creatures of Will and Temper

“Jang has put a wonderful amount of thought into a brisk, action-packed story.” -- Sia, Blogger - Every Book a Doorway

"[Monkey Around] uses myths to inform the world, but never bows to them, this feels like a very contemporary book" -- SF Book Reviews