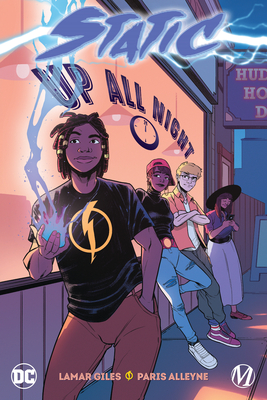 VIRGIL (aka STATIC) can do amazing things with his vast array of electrical abilities, but instantly mending a broken heart isn’t in his skill set.

Virgil Hawkins has just gone through a bad break up. He can’t get over his ex, so his best friend Richie has an idea for how to distract him: attend a music festival in their city of Dakota. But wouldn’t you know it—his ex is in attendance. And that’s just the beginning of his troubles.

A series of encounters and events leads to an all-night adventure involving super villains, a diner, a reluctant rapper, and a size-changing kleptomaniac, as well as Virgil’s frequent bad decision making. But in the end, with the help of his friends, Virgil will find he can move on from a broken heart.

LAMAR GILES is a two-time Edgar Award finalist in the YA category, for his debut YA thriller Fake ID (HarperCollins, 2014) and his second YA thriller, Endangered (Harper Collins, 20154). His third YA thriller, Overturned (Scholastic, 2017) was named a Kirkus Best Book of 2017. He is a founding member of We Need Diverse Books.


PARIS ALLEYNE is a Toronto based artist. In 2020, he won a prestigious comic book industry Eisner Award as Best Colorist on a Comic Book Series for Afterlift published by Dark Horse. STATIC: UP ALL NIGHT is his first project as an illustrator for DC Comics.