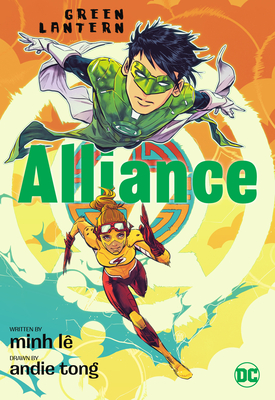 Tai Pham struggles with balancing school, his work in the family business, his friendships, and his new Green Lantern responsibilities. But Kid Flash arrives on the scene to become the super-hero partner Tai just might need.

It’s only been a few months since Green Lantern Tai Pham inherited his ring from his ba and defeated his nemesis, Xander Griffin. But Tai knows their last battle was only the beginning—and even though no one believes him, Tai is determined to prove that Xander is up to his old tricks again.

When a string of fires start popping up around Coast City, Tai finds himself stretched thin as he struggles to keep up with school, training, working at the store, and following Xander’s trail. That is, until a new hero, known as Kid Flash, shows up on the scene with an offer to help.

Can the heroes find the arsonist before it’s too late?

Minh Lê is a writer but, like his grandfather, is a man of few words. He is a national early-childhood policy expert, is the author of Green Lantern: Legacy and the picture books Drawn Together (illustrated by Dan Santat) and Let Me Finish! (illustrated by Isabel Roxas), and has written for the New York Times, the Horn Book Magazine, and the Huffington Post. A first-generation Vietnamese American, he went to Dartmouth College and has a master’s in education from Harvard University. Outside of spending time with his beautiful wife and sons in their home near Washington, D.C., Minh’s favorite place to be is in the middle of a good book. Visit Minh online at minhlebooks.com or on Twitter @bottomshelfbks.


Andie Tong’s past comic book and illustration experience includes titles such as Green Lantern: Legacy, Spectacular Spider-Man UK, The Batman Strikes!, Tron: Betrayal, Plants vs. Zombies, Star Wars, Tekken, and Stan Lee’s The Zodiac Legacy. Andie has also illustrated children’s books for HarperCollins for more than 10 years and has had the opportunity to work on multiple books with Stan Lee. Malaysian born, Andie migrated to Australia at a young age, and then moved to London in 2005. In 2012 he journeyed back to Asia and currently resides in Singapore with his wife and two children.