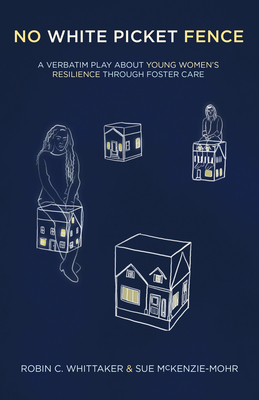 A powerful verbatim play about young women's resilience through foster care, No White Picket Fence is drawn from a research project involving in-depth interviews conducted by social work professor Sue McKenzie-Mohr with ten individuals who, as girls, grew up in the foster-care system and now identify in their own ways as living well. The play's dialogue is entirely verbatim - that is, drawn word for word from interview transcripts featuring all of the "word stumbles" (ums, ahs, and incomplete sentences) of regular speech, lending the play its raw, hyperreal feel. No White Picket Fence follows the women's unique stories in their own words from their experiences before being taken into care, through their time in care, into their current lives navigating the world as young adults. Their stories are raw, characterized by times of turmoil and suffering in their original family homes and later during impermanent arrangements in foster care and group homes. And yet these women's stories also highlight their persistent efforts to move toward living well on their own terms. Above all else, these are stories of resistance, resilience, and strength of the human spirit. Their accounts shed light on the urgency for greater and sustained efforts to improve a care system that struggles to meet the basic needs of the youth it is mandated to protect and nurture.

Robin C. Whittaker teaches, directs, writes, and creates theatre with students at St. Thomas University in Fredericton, New Brunswick, where he is Associate Professor and Drama Advisor in the Department of English and Artistic Producer and Faculty Advisor for Theatre St. Thomas. He holds a doctorate in drama from the University of Toronto's Centre for Drama, Theatre, and Performance Studies; a masters in drama from the University of Alberta; and an honours bachelor of arts in English and Theatre from Wilfrid Laurier University. At St. Thomas University he teaches courses in directing, acting, theatre theory and criticism, and dramatic literature and has supervised students in the fields of Canadian theatre and marginalization, scriptwriting, and stage management. He has written plays produced at universities and Fringe festivals in Edmonton, Winnipeg, Waterloo, and Fredericton and directed several maritime premieres for Theatre St. Thomas, including Michel Marc Bouchard's The Coronation Voyage, Michael Hollingworth's Trudeau and the FLQ, and the world premiere of No White Picket Fence. He currently serves as Vice President of the Canadian Association for Theatre Research (CATR). He is editor of the new play anthology Hot Thespian Action: Ten Premiere Plays from Walterdale Playhouse (2009 AUP), and contributed the Forward to Sally Clark's WANTED (Talonbooks 2004). He is the founding editor of STU Reviews, Fredericton's only ongoing theatre reviewing website. Robin has written articles on a range of Canadian theatre topics, many of which are related to nonprofessionalizing (community or amateur) theatre in the "professional era"; these are found in journals such as Theatre Research in Canada and Canadian Theatre Review.