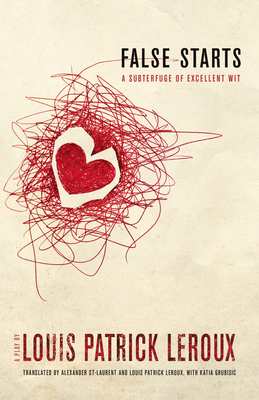 False Starts presents a series of determining moments between two people stuck reliving the same scene over and over, but in unexpected ways and in different genres (from diary to dramatic dialogue, film script to sound installation). Their interdependence and fundamental inability to say how they feel about one another over twenty years - in spite of their eloquence, in spite of their creativity - constitutes the background of the ongoing spectacle of their relationship. Made up of a series of short pieces originally published in French as Dialogues fantasques pour causeurs perdus, this translation by the author and Alexandre St-Laurent with Katia Grubisic also includes other previously unpublished texts. Originally staged for the stage, screen, and elevator at Montreal's matralab. Like the dual perspectives in the play, two commentators - Jenn Stephenson and Nicole Nolette - each contribute an introduction exploring the piece from quite different points of view. Cast of 1 man and 1 woman.

Louis Patrick Leroux: Louis Patrick Leroux founded Ottawa's Theatre la Catapulte, which he managed from 1992 to 1998. He was playwright in residence at Sudbury's Theatre du Nouvel-Ontario (1993-94, 2005-06, and 2006-07) and was a resident of the Leighton Artists' Studios at the Banff Centre for the Arts in 1994 as well as the CEAD International playwrights residency in 1999. Thirty of his plays, radio-plays, and screenplays have been performed on many stages, including the National Arts Centre Studio, Ottawa Arts Court, Theatre du Nouvel-Ontario, Theatre d'Aujourd'hui, Espace Libre, and Theatre la Licorne, was well as Radio-Canada. La Litiere (1994) was translated into English by Shelley Tepperman as Embedded (1999) and produced at Ottawa's Arts Court by Year One Theatre. The play was subsequently translated into German. Other plays are currently being translated into English. Louis Patrick Leroux has also written bilingual plays, Le Beau Prince d'Orange (1993) featuring William, prince of Orange, and his wife Mary Stewart and Ce corps/Doubt (We'll Always Hate Paris). Louis Patrick Leroux has degrees in Theatre and French Literature from the University of Ottawa and graduate degrees in Arts Management from HEC-Montreal and in Drama from the Sorbonne nouvelle. He teaches playwriting and literature at Concordia University. He is also the founding director of La demesure relative. Alexander St-Larent: Alexander St-Larent was born and raised suburban Quebec. He lives in Montreal, where he studies at the Universite de Montreal. His work has appeared in The Puritan and Matrix and his translation of Hugo Beauchemin-Lechapelle s untitled/sans titre can be found in The Best Canadian Poetry in English, 2016 (Tightrope Books). Rock has also modestly worked as a playwright and dramaturge. Katia Grubisic: Katia Grubisic is a writer, editor, and translator. She guest-edited the acclaimed Montreal issue of The New Quarterly and the journal s non-fiction supplement, and has been the editor of Arc Poetry Magazine. From 2008 to 2012, she was the coordinator of the Atwater Poetry Project reading series. She has been guest faculty in creative writing at Bishop s University, and has taught in CEGEPs and for the Quebec Writers Federation. Her work has appeared in various Canadian and international publications, and her collection of poems What if red ran out won the Gerald Lampert award for best first book."