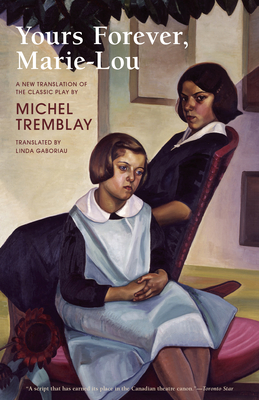 They say hindsight is 20/20. They're not wrong. Ten years after their parents' death in a car accident, now-grown sisters Carmen and Manon are together for one of their rare visits - and one of them is finally ready to confront their shared tragedy. Carmen is a boisterous country-and-western singer who has left her home, and all her past, in the dust. Manon lives a more sheltered life, closely aligned with the traditions of religious Quebec, which are now - in the mid-1970s - only beginning to come apart at the seams. Carmen is convinced it's time for Manon to end the years of mourning, while Manon is insulted that Carmen seems to have responded so unfeelingly to such a horror. Each sister has kept the memory of their parents alive in her own way. In fact - here they are, in living memory: Marie-Louise and L opold, the girls' parents, appear on stage simultaneously. Just beyond the ken of their daughters, they live out their final day. As the two daughters struggle to reconcile the events preceding the fatal crash, and as their parents play out the culmination of their sodden marriage, we discover there is more to the memory of that fatal day than meets the eye. And yet, can the blame really be laid at the feet of one person? Or can a whole socio-cultural paradigm, which twists its subjects into unbearable contortions and traps them in fear and submission, be at fault? Cast of 1 man and 3 women.

Michel Tremblay: Born in a working-class family in Quebec, novelist and playwright Michel Tremblay was raised in Montreal's Le Plateau neighborhood. An ardent reader since a young age, Tremblay began to write, in hiding, as a teenager. One of the most produced and the most prominent playwrights in the history of Canadian theater, Tremblay has received countless prestigious honors and accolades. Because of their charismatic originality, their vibrant character portrayals and the profound vision they embody, Tremblay's dramatic, literary and autobiographical works have long enjoyed remarkable international popularity; his plays have been adapted and translated into dozens of languages and have achieved huge success in Europe, the Americas and the Middle East. Of his own work, Tremblay has said, I know what I want in the theater. I want a real political theater, but I know that political theater is dull. I write fables." Tremblay's novel The Fat Woman Next Door Is Pregnant was long-listed for the CBC Canada Reads program in both 2002 and 2003. In 2004, he appeared as a guest of honor at the Calgary WordFest. In January and February of 2005, the Manitoba Theatre Centre presented TremblayFest: a two-week extravaganza in which fifteen of Tremblay's stage plays were performed by sixteen different theatre companies. In April 2006 -- as Montreal concluded its term as World Book Capital -- Tremblay was the recipient of the Blue Metropolis International Literary Grand Prix, awarded annually in recognition of a lifetime of literary achievement to a writer of international stature and accomplishment. Linda Gaboriau: Linda Gaboriau is an award-winning literary translator based in Montreal. Her translations of plays by Quebec's most prominent playwrights have been published and produced across Canada and abroad. In her work as a literary manager and dramaturge, she has directed numerous translation residencies and international exchange projects. She was the founding -director of the Banff International Literary Translation Centre. Gaboriau has twice won the Governor General's Award for Translation.