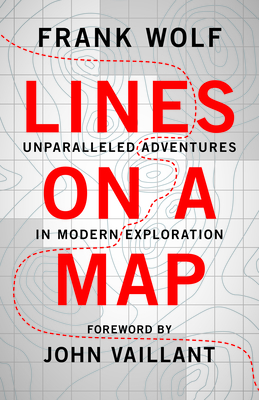 Two decades of adventure writing are captured in this entertaining and inspiring collection of travel journalism by renowned adventurer, writer, filmmaker and environmentalist Frank Wolf.

Lines on a Map is a compilation of Frank Wolf's best work from the past two decades. Some of the adventures include: two friends on a cycling and volcano-climbing odyssey across Java, the world's most populous island, in the world's most populous Muslim country, Indonesia, in the wake of 9/11; a surreal private lunch with former Prime Minister Pierre Trudeau during an 8000 km canoe journey across Canada; discovering the past and present on a 900 km hiking and kayaking journey from Skagway, Alaska, to Dawson City, Yukon; negotiating the cultural divide during a whitewater paddling expedition in Laos and Cambodia with Russian extreme kayakers; exploring the nature and politics of a multi-billion dollar pipeline in northern BC by hiking, biking and kayaking the GPS track of the proposed project route from the oil sands to the British Columbia coast; conducting a mammal tracking survey in the course of a 120 km ski traverse of Banff National Park; discovering the truth about the existence of Sasquatch in northern Ontario; retracing Viking history during a canoe trip across Scandinavia.

Complete with dozens of colour photographs, Wolf weaves together humour, drama and local knowledge to transport readers to some of the outermost corners of the globe in an epic quest to celebrate the freedom to move, explore and be wild.