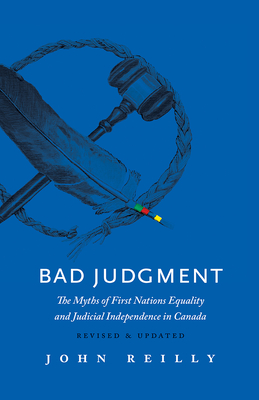 This revised and updated edition looks at the future of the Canadian legal and political systems as they relate to this country's indigenous communities.

During John Reilly's more than 30-year career with the Provincial Court of Alberta he became interested in how the Canadian judicial system dealt with Indigenous societies. He saw the failure of the "white" legal system to do justice for First Nation peoples, the harm caused to them by Canadian colonialism, and the failure of all levels of government, including tribal leadership, to alleviate their suffering and deal with the conflicting natures of European-style law and Indigenous tradition and circumstance.

As a result, Judge Reilly vowed to improve the delivery of justice to the Indigenous people in his community, and he used his perceived power as a jurist to positively influence their lives. Along the way he came into direct conflict with Canadian judicial administration and various questionable leaders among the echelons of both Canadian and First Nation governments. With the latest news and updates related to the ongoing struggle, Bad Judgment tells the story of this conflict and the impact it had upon Reilly's opinion of his country, his chosen profession and the future of Indigenous justice in Canada.

John Reilly is the bestselling author of Bad Medicine: A Judge's Struggle for Justice in a First Nations Community and Bad Judgment: The Myths of First Nations Equality and Judicial Independence in Canada, along with the recently released Bad Law: Rethinking Justice with an Indigenous Perspective. After 33 years in public service as a circuit court judge, Reilly retired, having become disillusioned with the Canadian criminal justice system and in particular its treatment of Indigenous people. Still publicly active and openly critical about the law, politics, and the legal system, he now seeks to challenge people to rethink the true meaning of justice, the need for drastic changes in the criminal justice system in Canada, and the need to change our attitudes towards Indigenous people. John lives in Calgary, Alberta.