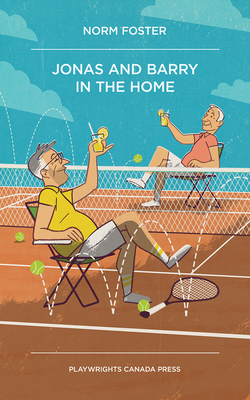 Barry is annoyed that he's already living in a seniors' home at sixty-seven, but it's worth it to live near his daughter, Rosie. Rosie, who works at the home, brought him in so he wouldn't be alone in case he had a heart attack like his father, brother, and uncle did before they were sixty-five. So Barry spends his time shuffling around in his slippers, taking naps, and having dinner with Rosie, and that's good enough for him.

But Barry doesn't get to revel in the quiet for long. Enter the loquacious and flirtatious Jonas, who wrote one hit song thirty-seven years ago. Jonas likes to indulge in the finer things in life, like decadent dates and nice clothes, and he sees Barry the curmudgeon as a fixer-upper. As they bicker and bond over women, sports, and family values, Jonas and Barry must learn to open up and face how to keep living their lives.

Norm Foster has written over sixty plays and been produced all over the world. His most popular plays include The Melville Boys, The Ladies Foursome, Hilda's Yard, and On A First Name Basis. He was made an Officer of the Order of Canada in 2017, and currently lives in Fredericton, New Brunswick.