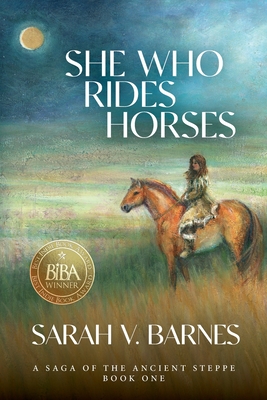 Set more than 6,000 years ago, She Who Rides Horses: A Saga of the Ancient Steppe (Book One) begins the story of Naya, the first person ever to ride a horse. Daughter of a clan chief, bolder than the other girls but shunned by the boys because of her unusual appearance, Naya often wanders alone through the vast grasslands where her people herd domesticated cattle, sheep and goats, and hunt wild horses for their meat. But Naya dreams of creating a different kind of relationship with the magnificent creatures. One day, while out roaming by herself, she discovers a filly with a chestnut coat as uncommon as her own head of red hair. With time running out before she is called to assume the responsibilities of adulthood, Naya embarks on a quest to fulfill her vision of galloping with the filly across the boundless steppe. Unwittingly, she sets in motion forces and events that will change forever the future of humans and horses alike.

Based on extensive interdisciplinary research, She Who Rides Horses imagines an encounter between a girl and a horse that is both timeless and grounded in fact. First and foremost a story, filled with adventure, peril, love and betrayal, the saga of Naya and the red filly also portrays fundamental shifts that occurred when humans went from living as herders and hunter/gatherers, dependent on their own two feet, to becoming mounted nomads, capable of spreading their language, lifestyle and beliefs across a huge swath of Eurasia and beyond. The domestication of the horse altered the course of history, transforming power dynamics, impacting gender relations and accelerating the diffusion of new assumptions about the nature of the cosmos and the relationship between humans and the natural world that we are still living with today. This is how it may have all begun...