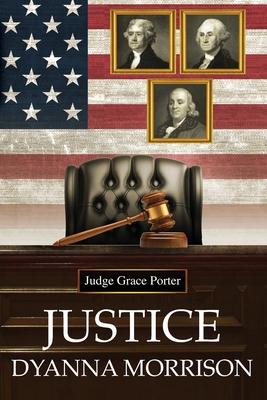 By Dyanna Morrison
for information about purchasing this book, please contact orders@bookpassage.com

Justice is the first of three plays in a thought-provoking trilogy, following the struggles and triumphs of newly seated Judge Grace Porter. Court cases involving First Amendment protections and abuses have become highly politicized over the last several years. As Americans, we continue to enjoy these basic freedoms as laid down for us by our framers over two hundred and forty years ago. Justice shines a spotlight on two recent court cases, as seen through the eyes and minds of our founding fathers through a one-way window in the courtroom The storyline artfully weaves between the present and the past and as the courtroom proceedings unfold, it is interspersed with the rationale and thought processes our founding fathers used in framing The Constitution and The Bill of Rights, which eventually led to their ratification in 1791. It is an enlightening and unprecedented portrayal of what "the guys who wrote the stuff" might think if they were able to witness current day legal proceedings. The flashback scenes provide a visual representation of the intentions and deliberations of our founding fathers and provide a powerful vehicle to represent Grace's conscience and thought processes involved in her coming to terms with her true inclinations as to what is a fair and judicial interpretation of the law. The first trial focuses on the "J20" trials, resulting from the brazen arrests of over two hundred protesters at the Inauguration Day festivities for Donald Trump, in Washington, D.C., on January 20, 2017, which many Americans seem to be unaware of. The second trial is loosely based around the tragedies that occurred at the Charlottesville, "Unite the Right," rally on August 11-12, 2017. What would they think if they could witness how the laws that they penned are being adjudicated, and would they agree? There has been a lot of reignited debate regarding our founder's legacy as a result of the Black Lives Matter movement. Our founders were imperfect, aspirational idealists and they were patriots, with a vision of self-governance, the likes which had never been instituted at the scale they envisioned to incorporate and preside over. They penned and ratified our Constitution and Bill of Rights that continue to steer the course of our democracy in the year of 2020 and continue to represent ideologies of unity and inherent freedoms, framing our current, ongoing dialogue of equality and justice for all Americans.Based on over nineteen years of research, Justice, is factually-based on the events and dialogues our framers had in their debate over our unification and is a timely reminder of the enormity of the task at hand that they faced, and the unlikelihood that they would ever succeed based on the precarious balance of the political dynamics in our country during its infancy. Much of the founding fathers dialogue is verbatim, the words they actually spoke It is a wonderful celebration of the richness of the spoken word Justice conveys a palpable sense of hope, that one strong and righteous mind can make the difference in changing our course of events, versus perpetuating the status quo. Stay-tuned for the next book release in the trilogy, Redemption.