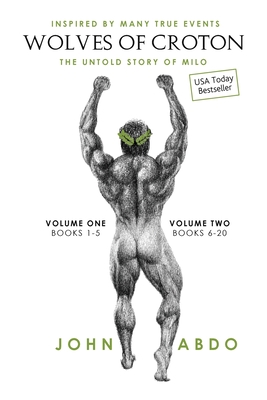 An epic tale of the "Father of Progressive Resistance Training", told by Olympian and fitness Hall-of-Famer John Abdo.
Thousands of years after his death, Milo of Croton is still undisputedly revered to be the strongest man who ever lived. This dominant Olympian wrestler routinely entered packed stadiums carrying a full-grown bull across his back. As he paced the track, Milo welcomed his cheering fans to slap the loins and tug the tail of his colossal bovine pet. Esteemed for his unfathomable prowess, through progressive adaptations adhering to unorthodox conditioning methodologies, Milo of Croton - whose name remains prominent in sports today - is regarded by us moderns as the 'Father of Progressive Resistance Training.' Within the pages of this book, based on historical accounts, readers learn how Milo accomplished his monumental wrestling achievements - a career that amazingly endured an unparalleled three decades.
An epic odyssey of inspirational and motivational magnitude, 'Wolves of Croton- The Untold Story of Milo' details Milo's genetic and epigenetic influencers. Attend Milo's strength conditioning sessions and wrestling practices, learn the origins of modern-day strength training and the achievement of peak performance, then step into the arena and watch Milo mangle his opponents inside the pit.
Travel with Milo from his enigmatic beginnings to his epic athletic events, then onto the battlefield where Milo commands an army comprised of Crotonian athlete-soldiers against a formidable foe of superior numerical advantage. A tale of athleticism and leadership, this meticulously-research and fact-based story will be sure to both motivate and entertain.