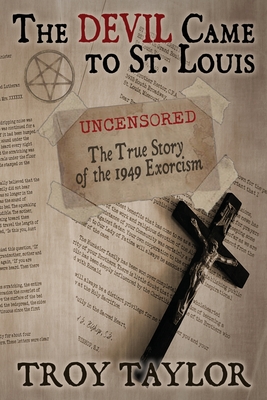 THE UNCENSORED TRUE STORY OF THE 1949 EXORCISM

The 1949 exorcism that took place in St. Louis, Missouri, has become one of the greatest unsolved mysteries in American history. But is the story so mysterious because of the events that occurred -- or because so much of the story has been kept secret over the years? After the events in the story concluded, it was decided that further investigation of the case was "counterproductive", and details were buried. The identity of the allegedly possessed boy was hidden to protect his identity. If not for a series of coincidences, the story would have never likely been revealed at all and would never have inspired books, films, documentaries, and more.

Author Troy Taylor has spent more than two decades researching the facts behind this chilling story - searching through old records, visiting the sites that still exist, and interviewing the surviving witnesses to the strange events. But even when he published his first book on the case in 2006, it was nearly impossible to separate fact from fiction because so much of the story had been purposely hidden. He had also made a promise that he would not reveal the identity of the family - or that of the boy at the center of it - as long as he was living. This book is the result of a promise that he sadly no longer needs to keep.

In this updated and uncensored edition of his acclaimed book, he reveals the complete truth for the very first time, uncovering secret details, stories that have never been told, and a full accounting of a story that goes far beyond anything you've ever heard before. Read new interviews, never-before-published details, and chilling accounts - and then decide for yourself from this new evidence what you choose to believe - or not believe - about the time when the Devil came to St. Louis