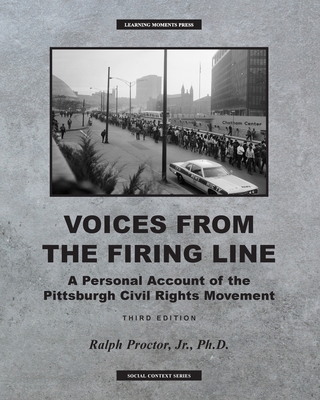 VOICES FROM THE FIRING LINE is a memoir, a tribute, and a eulogy. Ralph Proctor traces his own development from a na ve, "color-blind," youth to a militant advocate for equal justice. Adding to his own account are the voices of other leaders in Pittsburgh's civil rights movement. In recording and sharing the experiences of these remarkable men and women, Proctor offers a tribute to their pain, courage, and sacrifice. Through numerous examples of covert discrimination, the pervasive Jim Crow culture is revealed along with efforts to overcome barriers to integration. In the final analysis, the book is a eulogy for The Hill, one of the most vibrant Black enclaves in the United States. Proctor looks back at the gains achieved and the losses incurred as the movement for equal inclusion waned in the years following the assassination of Martin Luther King, Jr. He asks, "Did we do enough?" The question, while posed to his comrades in the fight for justice, is worth asking ourselves today.