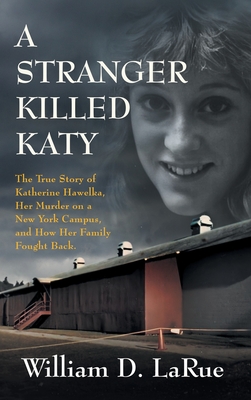 By William D. Larue
for information about purchasing this book, please contact orders@bookpassage.com

In the early morning hours of August 29, 1986, Clarkson University sophomore Katy Hawelka - bright, pretty and full of life - strolled back to her upstate New York campus after a night out. On the dimly lit path beside the university's ice hockey arena, a stranger emerged from the darkness. The brutal sexual assault and strangulation that followed rocked the campus and the local community.

When Katy was declared brain-dead three days later, her family's nightmare had only just begun.Terry Connelly soon learned details about her daughter's death that would make her blood boil. From the bungling campus guards who could have stopped the murder, to mistakes by others that allowed the killer to wander the streets committing violence, Katy's mother became certain of one thing: The criminal justice system only meant "justice for the criminals."

A STRANGER KILLED KATY is the true story of a life cut tragically short, and of the fight by a grieving mother and others more than 30 years later to ensure that a killer would spend the rest of his life behind bars.