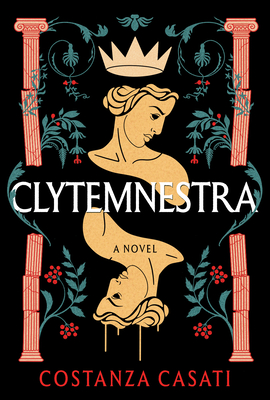 For fans of Madeline Miller's Circe, a stunning debut following Clytemnestra, the most notorious villainess of the ancient world and the events that forged her into the legendary queen.

As for queens, they are either hated or forgotten. She already knows which option suits her best…

You were born to a king, but you marry a tyrant. You stand by helplessly as he sacrifices your child to placate the gods. You watch him wage war on a foreign shore, and you comfort yourself with violent thoughts of your own. Because this was not the first offence against you. This was not the life you ever deserved. And this will not be your undoing. Slowly, you plot.

But when your husband returns in triumph, you become a woman with a choice.

Acceptance or vengeance, infamy follows both. So, you bide your time and force the gods' hands in the game of retribution. For you understood something long ago that the others never did.

If power isn't given to you, you have to take it for yourself.

A blazing novel set in the world of Ancient Greece for fans of Jennifer Saint and Natalie Haynes, this is a thrilling tale of power and prophecies, of hatred, love, and of an unforgettable Queen who fiercely dealt out death to those who wronged her.

Costanza Casati was born in Texas in 1995, grew up in a village in Northern Italy and lived in the UK for five years. Before moving to London, she attended a classical Liceo in Italy, where she studied Ancient Greek, and Ancient Greek literature, for five years. Costanza is a graduate of the prestigious Warwick Writing MA programme where she earned a distinction, and currently works as a freelance journalist and screenwriter. Clytemnestra is her debut novel.

One of Goodreads' Buzziest Debuts of 2023

"Propulsive...richly drawn and lovingly rendered, Casati's Clystemnestra is a brilliant, fierce woman placed, again and again, in untenable circumstances. Readers who are enjoying the current plethora of mythological retellings won't want to miss this absorbing examination of a complicated queen." — Booklist, STARRED review

"A great literary achievement that gives voice to characters who, due to their genders, have been vilified and silenced throughout the millennia...Clytemnestra is a literary tour de force—a novel of passion and vengeance set in Ancient Greece." — Foreword Reviews, STARRED review

"Crackles with vivid fury, passion and strength. A powerful, thought-provoking portrayal of a fascinating and complicated woman framed in beautiful prose. I loved it." — Jennifer Saint, bestselling author of Ariadne and Elektra

"What a pleasure to fall in love with Clytemnestra through the mind of Costanza Casati, who renders a singularly vibrant Greece, populated by familiar characters and absolutely alive with emotion and suspense. Casati reveals a Clytemnestra we’ve never met before: fiercely intelligent, passionate, and loving – and willing to do anything to avenge the ones she loves." — Naomi Krupitsky, New York Times bestselling author of The Family

"Savage, passionate, and absolutely spellbinding. Costanza Casati’s recreation of Sparta is astonishing—you feel you are with Clytemnestra, completely immersed in the brutal world she inhabits with her siblings, whose complex relationships are drawn with skill and tenderness. Clytemnestra’s rage, her heartbreak, and her determination radiate off the page—I was utterly gripped." — Elodie Harper, bestselling author of The Wolf Den

"Clytemnestra redefines the retelling genre with a heroine who, instead of enduring suffering, avenges it. Complex characters, stylish writing and a glimpse into the heart of one of history’s most reviled women – Casati’s Clytemnestra is a self-determined warrior queen." — Annie Garthwaite, acclaimed author of Cecily

"Powerful and sympathetic, Clytemnestra shines a light on Helen of Troy’s overshadowed sister. Crafted with page-turning suspense, Casati spins a mesmerizing story of an ambitious warrior queen who must use all her skill to protect herself and those she loves from men who view women not as equals, but as pawns to be sacrificed upon the altars of lust, greed, and fame. An ancient and intriguing tale made fresh for today’s 21st century battles." — Liz Michalski, author of Darling Girl

"Bold and elegant, Costanza Casati’s debut bursts onto the page in flashes of light. This book deconstructs Clytemnestra’s infamy and then, with tremendous empathy and wisdom, reconstructs her into an enthrallingly complex figure filled with passion and spirit. This fiery tale of revenge and desire really is the stuff of legend—Casati’s unflinching storytelling is irresistible." — Sarah Priscus, author of Groupies

"Ablaze with transporting moments of deep tenderness and visceral ferocity, Casati's Clytemnestra gives the phrase 'fight like a girl' its rightfully heroic and empowering meaning!" — Buki Papillon, author of An Ordinary Wonder