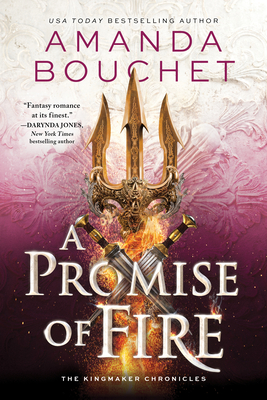 This is book number 1 in the The Kingmaker Chronicles series.

Sexy and addictive, this white-hot fantasy broke all the rules:

KINGDOMS WILL RISE AND FALL FOR HER...

Cat Fisa isn't who she pretends to be. She's perfectly content living disguised as a soothsayer in a traveling circus, avoiding the destiny the Gods—and her dangerous family—have saddled her with. As far as she's concerned, the magic humming within her blood can live and die with her. She won't be a pawn in anyone's game.

But then she locks eyes with an ambitious warlord from the magic-deprived south and her illusion of safety is shattered forever.

Griffin knows Cat is the Kingmaker—the woman who divines truth through lies—and he wants her to be a powerful weapon for his newly conquered realm. Kidnapping her off the street is simple enough, but keeping her by his side is infuriatingly tough. Cat fights him at every turn, showing a ferocity of spirit that burns hot...and leaves him desperate for more. But can he ever hope to prove to his once-captive that he wants her there by his side as his equal, his companion...and maybe someday, his Queen?

Fans of Jennifer Armentrout and Sarah J. Maas will burn for A Promise of Fire.

Amanda Bouchet is a USA Today bestselling author of Fantasy Romance and Sci-fi Romance. She was a Goodreads Choice Awards top 10 finalist for Best Debut in 2016. For more about Amanda's books with equal parts adventure and kissing, connect with her at www.amandabouchet.com.