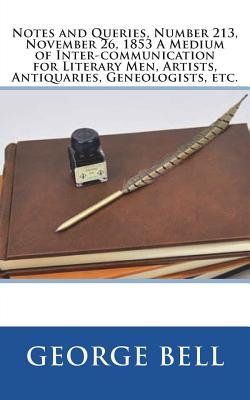 By George Bell
for information about purchasing this book, please contact orders@bookpassage.com

Notes and Queries, Number 213, November 26, 1853 A Medium of Inter-communication for Literary Men, Artists, Antiquaries, Geneologists, etc. George Bell THE STATE PRISON IN THE TOWER. A paragraph has lately gone the round of the newspapers, in which, after mentioning the alterations recently made in the Beauchamp Tower and the opening of its "written walls" to public inspection, it is stated that this Tower was formerly the place of confinement for state prisoners, and that "Sir William Wallace and Queen Anne Boleyn" were amongst its inmates. Now, I believe there is no historical authority for saying that "the Scottish hero" was ever confined in the Tower of London; and it seems certain that the unfortunate queen was a prisoner in the royal apartments, which were in a different part of the fortress. But so many illustrious persons are known to have been confined in the Beauchamp Tower, and its walls preserve so many curious inscriptions-the undoubted autographs of many of its unfortunate tenants-that it must always possess great interest. Speaking from memory, I cannot say whether the building known as the Beauchamp (or Wakefield) Tower was even in existence in the time of Edward I.; but my impression is, that its architecture is not of so early a time. It is, I believe, supposed to derive its name from the confinement in it of Thomas de Beauchamp, Earl of Warwick, in 1397. Of course it was not the only place of durance of state prisoners, but it was the prison of most of the victims of Tudor cruelty who were confined in the Tower of London; and the walls of the principal chamber which is on the first storey, and was, until lately, used as a mess-room for the officers, are covered in some parts with those curious inscriptions by prisoners which were first described in a paper read before the Society of Antiquaries in 1796, by the Rev. J. Brand, and published in the thirteenth volume of The Arch ologia. We are delighted to publish this classic book as part of our extensive Classic Library collection. Many of the books in our collection have been out of print for decades, and therefore have not been accessible to the general public. The aim of our publishing program is to facilitate rapid access to this vast reservoir of literature, and our view is that this is a significant literary work, which deserves to be brought back into print after many decades. The contents of the vast majority of titles in the Classic Library have been scanned from the original works. To ensure a high quality product, each title has been meticulously hand curated by our staff. Our philosophy has been guided by a desire to provide the reader with a book that is as close as possible to ownership of the original work. We hope that you will enjoy this wonderful classic work, and that for you it becomes an enriching experience.