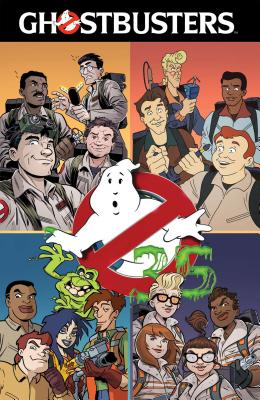 First out of the Firehouse are the original 'busting team of Peter, Winston, Egon and Ray, who have seen a lot of things during their time as paranormal investigators, but the latest case might just turn history on its head! Could it be that they've found proof of... Atlantis? By Erik Burnham and Dan Schoening.

The Real Ghostbusters keep losing business to a flashy new rival ghost-catching company: SPOOKS AWAY! They seem to have better gear, better threads... better everything! In fact, Spooks Away seems determined to ruin the RGB. But there's something far more sinister than a hostile takeover going on here, and it's up to Ray Stantz to go undercover to find out who--or what--is behind Spooks Away's sudden rise to supernatural elimination superstardom. By Cavan Scott and Marcelo Ferreira.

Do demons get visitation rights? That's the question facing a harried young mother as she tries to accommodate a stream of otherworldly visitors intent on paying their respects to her half-demon toddler. When the ghosts begin to herald the arrival of the girl's father--rumored to be a class 7 entity--Mommy knows who she has to call: The Answer The Call Ghostbusters! Erin, Abby, Patty, and Holtzman find themselves mediating the custody battle from hell... and it's a scorcher! By Devin Grayson and SL Gallant.

Some people wish for the ability to fully communicate with the animals around us, but when the furry, feathered, and finny inhabitants of the Central Park Zoo star talking and demand their release, the people of New York just wish they'd shut up! Egon Spengler and his Extreme Ghostbusters race to answer the call, unaware of one creature's fiendish plot to control the possessed animals and drive them to attack humanity in revenge for their incarceration. By Jime Beard, Keith Dallas, and Tim Lattie.

Erik Burnham is a Minnesotan writer and artist that first broke into comics by way of the Nick Landime feature from Shooting Star Comics. This led first to other anthologies and then work for IDW Publishing, up to and including his critically acclaimed work on the Ghostbusters line of comic books and, later, the official Tobin's Spirit Guide. Erik's been fortunate to work with many companies in the last few years, including Cryptozoic, Dynamite, IDW, Insight Editions, Marvel, and Panini on properties such as Ghostbusters, Teenage Mutant Ninja Turtles, Back to the Future, Galaxy Quest, Scarlet Spider, New Warriors, Red Sonja and KISS -- with more on the way (which is good news, because he loves his work.)

“Accessible to both the longtime fans of this franchise and the newcomers. Kudos to Burnham and Schoening for achieving that balancing act." -But Why Tho?