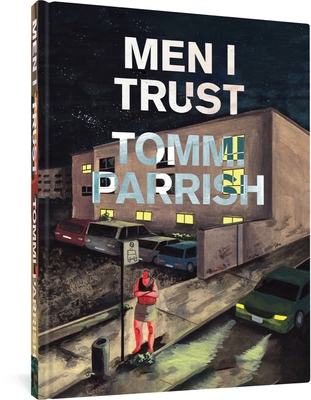 Tommi Parrish's sophomore graphic novel establishes them as one of the most exciting voices in contemporary literature.

Eliza is a thirtysomething struggling single mother and poet. Sasha, a twentysomething yearning for direction in life, just moved back in with her parents and dabbles as a sex worker. The two strike up an unlikely friendship that, as it veers toward something more, becomes a deeply resonant exploration of how far people are wil­ling to go to find intimacy in a society that is increasingly not conducive to it.


In Sasha and Eliza, Parrish has created two of the most fully realized characters in recent contemporary fiction. Parrish's gorgeously painted pages showcase a graceful understanding of body language and ear for dialogue, brilliantly using the medium of comics to depict the dissonance between the characters' interior and exterior experiences. Men I Trust is about not-always-healthy people attempting to make healthy connections in a disconnected world, and is one of the most moving and insightful works of literary fiction in any medium this year.

Tommi Parrish (b. 1989, Melbourne) is a trans Australian cartoonist and painter living in Western Massachusetts. Their debut work,The Lie and How We Told It, won the 2019 Lambda Literary Award for the best LGBTQ graphic novel, was nominated for the Ignatz award, was featured in many best of 2018 lists, and translated into 11 languages worldwide. Tommi was the 2020 recipient of the Center For Cartoon Studies Fellowship and their work has been showcased in The New Yorker, Granta Magazine, The New York Times, Pitchfork, Vice, and many more.

Parrish’s tactile paintwork conjures humans with hulking bodies and baseball heads, all of them wondering whether the messes they’re in are the result of mistakes they’ve made or some kind of perverse destiny they were always bound for.
— Vulture

Parrish… relentlessly interrogates issues of gender and sexuality, pointing out that strict binaries are mostly jerry-built and easily broken.
— PEN

With each hand-painted panel, author Tommi Parrish communicates an intense atmosphere and delves thoughtfully into the themes of queer desire, masculinity, fear, and the fading of past relationships.
— Eyes on Design