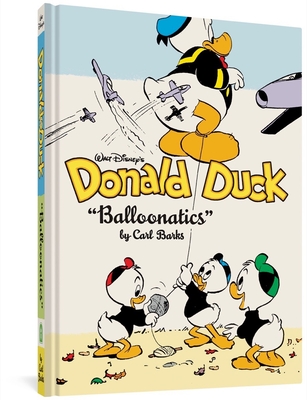 “In Carl Barks' Duckburg we see all the human frailties: Donald Duck's anger, Scrooge's ambition, the Beagle Boys' greed. Barks was a virtuoso artist and writer who combined breakneck action with detailed and subtle art. You will find a master at his peak in 'Lost in the Andes,' and your inner-child will thank you.”
— Eric Schultheis, Books Inc., Berkeley, CA

Carl Barks's stories of the Junior Woodchucks starring Huey, Dewey, and Louie — written and penciled by Barks with finishes by internationally acclaimed Duck artist Daan Jippes — debut in this volume! Other stories include: When Gyro Gearloose invents a ten-story-tall Donald Duck balloon — bigger than anything ever seen at the Macy's Parade! — Donald decides to take a ride. But Gyro’s "new balloon gas" is stronger than he thought it was, and Donald finds himself out of control, sailing higher and higher, until…

Then, Huey, Dewey, and Louie try to help a "fraidy falcon" overcome his fear of flying by getting Donald to help, but Donald has his own ideas…

Next, somebody's blowing up experimental rockets at the launchpad, and the nephews are on the trail of the spy, but Donald’s sure of who it's not — until he finds himself on board the next rocket to blast-off…

180 pages of story and art, each meticulously restored and newly colored. Insightful story notes by an international panel of Barks experts.

Carl Barks (1901-2000, b. Merrill, Oregon; d. Grants Pass, Oregon), one of the most brilliant cartoonists of the 20th century, entertained millions around the world with his timeless tales of Donald Duck and Barks’s most famous character creation, Uncle Scrooge. Over the course of his career, he wrote and drew more than 500 comics stories totaling more than 6,000 pages, most anonymously. He achieved international acclaim only after he semi-retired in 1968. Among many other honors, Barks was one of the three initial inductees into the Will Eisner Comic Awards Hall of Fame in 1987. (The other two were Jack Kirby and Will Eisner.) In 1991, Barks became the first Disney comic book artist to be recognized as a “Disney Legend,” a special award created by Disney “to acknowledge and honor the many individuals whose imagination, talents, and dreams have created the Disney magic.” He has been similarly honored in many other countries around the world.