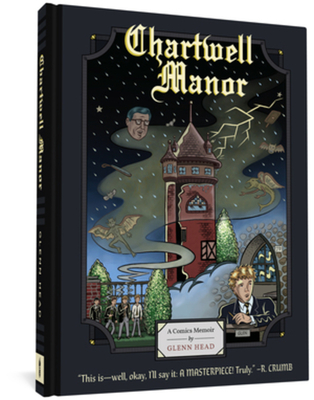 Veteran alternative cartoonist Glenn Head’s harrowing graphic memoir is about years of sexual and emotional abuse suffered at a boarding school during his adolescence, and the resultant trauma that took him almost 50 years to process before being able to tell his story publicly.

No one asks for the childhood they get, and no child ever deserved to go to Chartwell Manor. For Glenn Head, his two years spent at the now-defunct Mendham, NJ, boarding school — run by a serial sexual and emotional abuser of young boys in the early 1970s — left emotional scars in ways that he continues to process. This graphic memoir — a book almost 50 years in the making — tells the story of that experience, and then delves with even greater detail into the reverberations of that experience in adulthood, including addiction and other self-destructive behavior. Head tells his story with unsparing honesty, depicting himself as a deeply flawed human struggling to make sense of the childhood he was given.

Glenn Head was born in 1958 in Morristown, New Jersey, and began drawing comics when he was fourteen.  In the early 1990s Head co-created (with cartoonist Kaz) and edited Snake Eyes, the Harvey-Award nominated cutting edge comix anthology series and he was a frequent contributor to the Fantagraphics' comix anthology quarterly Zero Zero.  From 2005 to 2010 Glenn edited and contributed to the Harvey and Eisner-nominated anthology HOTWIRE Comics and recently created his graphic epic, Chicago (2015).  He lives in New York City.

Chartwell Manor is a raw and cathartic story about how to reckon with the past, and a powerful reminder that sexual assault can take years to understand, much less recover from.

Unflinchingly honest and hypnotically powerful, this is a standout entry on the shelf of the great graphic autobiographies.
— Publishers Weekly

This is a great graphic novel. I couldn’t put it down... Starkly honest, a powerful story...the level of merciless self examination...I was deeply impressed. Head has traveled a long way to get to this point. This is... well, okay, I’ll say it... A Masterpiece! Truly. Very few writers or artists ever reach this level of self-revealing truth. It’s good for the world...
— R. Crumb

Chartwell Manor is a painful, riveting and brutally honest memoir — possibly the most honest one I’ve ever read. I loved it! This clearly took a lot of guts to produce, as well as a lifetime to process!

A difficult and important memoir from Glenn Head and up there with books such as Maus in terms of its impact.

Chartwell Manor is, simply put, a magnum opus, among the best graphic memoirs of all time, and one of the best comics of the year.

In Chartwell Manor, Head takes a very personal walk down a traumatic memory lane to tell the raw and honest story of his experience and how it affected him, finding release in the telling.