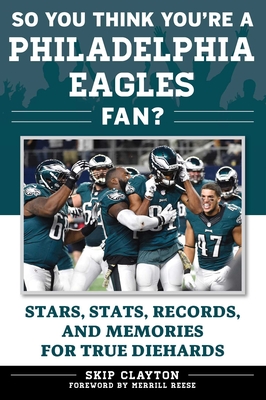 Fly Eagles Fly! Test and expand your knowledge of The Birds. Rather than merely posing questions and providing answers, you’ll get details behind each—stories that bring to life players and coaches, games and seasons.

This book is divided into four parts, with progressively more difficult questions in each new section. The Rookie section contains the most basic questions. Next come the Starter and All-Pro sections, followed by the biggest challenge: the Hall of Fame.

Also, you’ll learn more about the great Eagles players and coaches of the past and present, including Norm Van Brocklin, Steve Van Buren, Chuck Bednarik, Pete Retzlaff, Harold Carmichael, Dick Vermeil, Mike Quick, Randall Cunningham, Reggie White, Andy Reid, and Carson Wentz.. Some of the many questions that this book answers include:

This book makes the perfect gift for any fan of Philadelphia football!

Skip Clayton hosts Racing Wrap, a weekly one-hour radio show on WBCB Levittown, Pennsylvania, and has covered sports for the ABC Radio Network for over forty years. Clayton is also the author of Philadelphia’s Big Five and coauthor of Tales from the Miami Dolphins Sideline and 50 Phabulous Phillies. He resides in Sellersville, Pennsylvania, with his wife, Joanne.