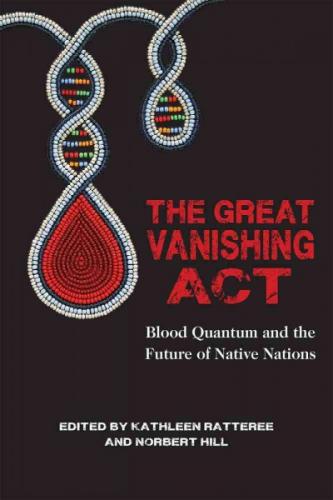 The Indian Reorganization Act of 1934 was the US government’s attempt to define who “Indians” were. Among the criteria the act set was a blood quantum, which declared that “Indians” were "all other persons of one-half or more Indian blood". Today, many tribes wrestle with the legacy of blood quantum and “Indian” identity, as they work to manage tribal enrollment and social services. As the bloodlines grow increasingly diluted, within a few generation, recognized tribes might legally disappear. Through essays, personal stories, case studies, satire, and poetry, The Great Vanishing Act brings together writers from around the world to explore the biological and cultural metaphor of blood quantum, the most critical issue facing Indigenous populations in the twenty-first century.

Norbert S. Hill is an enrolled citizen of the Oneida Nation of Wisconsin and has recently retired as Area Director of Education and Training for the Nation. Hill’s previous appointment was Vice President of the College of Menominee Nation for their Green Bay campus. Hill served as the executive director of the American Indian Graduate Center (AIGC) in New Mexico, a nonprofit organization providing funding for American Indians and Alaska Natives to pursue graduate and professional degrees. Previous positions include: the executive director of the American Indian Science and Engineering Society, assistant dean of students at the University of Wisconsin-Green Bay, and director of the American Indian Educational Opportunity Program at the University of Colorado, Boulder. He founded Winds of Change and The American Indian Graduate, magazine, publications of AISES and AIGC respectively. Hill holds two honorary doctorates from Clarkson University (1996) and Cumberland College (1994). He resides on the Oneida reservation with his wife.  Kathleen Ratteree has worked with the Oneida Nation Trust and Enrollment Committee since 2013. She has served as Project Manager for Sustain Oneida, a group that facilitates constructive community dialogue on tribal enrollment criteria. Over the past three years she has written a series of articles for the Oneida tribal newspaper, The Kalihwisaks, on identity, citizenship, blood quantum, demographics, sovereignty, and tribal governance. The articles have helped raise awareness of enrollment issues and population trends. They have also encouraged community engagement in the issues of membership/citizenship. Kathleen holds a Master of Science in medical anthropology, a Master of Public Health and a certificate of Global Health from the University of Madison-Wisconsin. Kathleen lives near Green Bay, WI with her husband, two young children, a 100-pound dog, twelve chickens, and various wildlife.

"This extraordinary, wildly informative book provides deep insight to the challenges Native America faces with blood quantum. The book could very well inspire Native America to consciously and deeply rethink how our tribes have been delineated by blood quantum policy and its pure intent to extinguish our people." —Richard Luarkie, CEO, Emerging Equities Solutions Group, Former Governor for Pueblo of Laguna