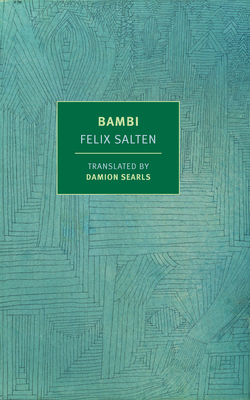 Newly retranslated, this elemental novel about danger, loss, and coming of age in the natural world was the source material for the classic Disney animated film.

Bambi first came out in Vienna a hundred years ago, the work of Felix Salten, a Viennese litterateur, journalist, and man about town, and was an immediate success with readers. An English translation soon appeared with an introduction by the Nobel Prize winner John Galsworthy and was widely and well reviewed. Later Walt Disney made his famous movie of the book, and as a consequence Salten’s intimate, delicate, poetic, and gripping tale of forest life, a book that captures both the calm and the disquiet of the animal world, has come to be thought of as a children’s book. Bambi is certainly a book that children can enjoy, but it is also a moving and lasting contribution to the literature of the natural world. In Damion Searls’s new translation the fawn Bambi and his mother, the groves and thickets of the forest, the open and dangerous space of the great field, the ever-present threat of the human—the whole intricate weave of life and death that Salten handles so deftly—all come alive for a new generation of readers. Paul Reitter’s afterword discusses the surprising political readings to which Salten’s fable of the woods was subjected.

Felix Salten began his career as a writer by penning poetry and criticism for the Viennese press. He published his first collection of short stories in 1900, and by the end of his life, he had produced numerous novels, stage and screenplays, librettos, essay collections, and travel books. Bambi is his most famous work.

Damion Searls is a translator from German, French, Norwegian, and Dutch and a writer in English. He has translated and contributed to a number of NYRB Classics. His own books include What We Were Doing and Where We Were Going, The Inkblots, and The Philosophy of Translation.

Paul Reitter teaches in the German department at the Ohio State University. He is the co-editor of two NYRB Classics, Friedrich Nietzsche's Anti-Education and Max Weber's Charisma and Disenchantment.

“Returning to Bambi nearly a century after it was published is an opportunity to attune ourselves to its cacophony of sounds, its ripples of gossip, its characters’ headbutting. The book is a rich and busy ecosystem — much like a Viennese café.” —Maddie Crum, Los Angeles Review of Books

"The novel combines a richly imagined animal world with the narrative trajectory of a Bildungsroman." —Leo A. Lensing, TLS

"Bambi articulates a tension between fear and desire, and an attempt to dominate one’s emotions to avoid the pitfalls of foolishness. . . .Thanks to a new translation from Damion Searls. . .Salten’s name and prose and the true, complex spirit of Bambi are finally restored." —Farah Abdessamad, Observer

"Bambi is a delicious book. Delicious not only for children but for those who are no longer so fortunate. For delicacy of perception and essential truth I hardly know of any story of animals that can stand beside this life study of a forest deer. Felix Salten is a poet." —John Galsworthy