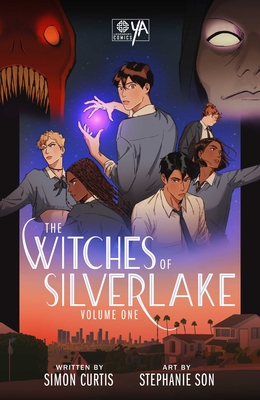 It's always tough being the new kid in the coven.

Elliot Green has had a rough year. His dad died, he had to move across the country, and now he’s about to start high school in one of LA’s most prestigious private schools, where his mom has accepted the position of Vice Principal. He’s quickly taken in by the school’s outcasts: the scholarship kids; the queer kids; and the ones who just don’t really fit in with the glossy trust fund babies of SJTBA. They quickly let him in on their little secret…they are witches. Elliot joins them in their world among the crystal stores and occult shops of Silverlake and ends up joining his new friends’ coven. During one of their magical experiments, they accidentally release a bloodthirsty demon that starts murdering their classmates and teachers. Elliot and his coven realize that the fun and games of playing with crystals and candles is over, that magic is powerful, real, and that it might be more dangerous than they’d ever imagined.

Simon Curtis first appeared in Nickelodeon's Spectacular!, and released his viral album, 8Bit Heart, in 2010. The following year, his debut album at retail, RA, landed at number 19 on Billboard's Dance and Electronic Albums chart, all without the aid of a label, manager or publicist. Now, Simon has over 111 million plays and 500,000 monthly listeners on Spotify, as well as almost 1 billion plays across YouTube, with a comeback album slated for Fall 2022. His debut novel from Simon & Schuster, Boy Robot, was released in 2016, and the sequel, Robot Army, is set to arrive in 2024. The Witches of Silverlake is Simon’s debut graphic novel.

Stephanie Son is an illustrator currently based in Seoul, South Korea. She has collaborated with various publications such as Penguin Random House, Legendary Comics, Pixiv/Kadokawa and Holiday House, as well as comic conventions such as the ThoughtBubble festival in the UK. Narratives and aesthetics that explore themes of diversity and connections are what drives her to do what she does.