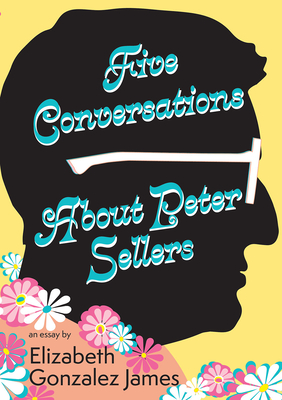 Five Conversations About Peter Sellers is an essay that begins as an exploration of the author’s burgeoning obsession with Peter Sellers, and specifically his role in hijacking and derailing production of the spy spoof, Casino Royale, in the late 60s. But what begins as a reported piece on how the film set erupted into chaos, quickly devolves into its own chaos as the essay splits into 5 different narrators, each with their own idea of what the essay is actually about. Is it about how Peter Sellers and his oversize ego ruined Casino Royale? Is it about how society has too long allowed horrible men to run the world? Is it an exploration of the nature of the essay as a creative form? Or is Peter Sellers and his genius at impersonation actually a vehicle through which the author probes her own shifting identity as a bi-ethnic person? The answer is...yes.
From Five Conversations About Peter Sellers
Beth: There’s a passage in Notes from Underground where the narrator speaks about the perverse pleasure of knowing your own vileness. ‘This pleasure comes precisely from the sharpest awareness of your own degradation; from the knowledge that you have gone to the utmost limit; that it is despicable, yet can’t be otherwise, that you no longer have any way out, that you will never become a different man.’ Build all the utopias you want, but some people can only know they’re alive when they’ve destroyed everything beautiful around them.

ELIZABETH GONZALEZ JAMES is the author of the novels Mona at Sea and The Bullet Swallower. She is the Interviews Editor at The Rumpus. Originally from South Texas, she lives in Massachusetts with her family.

“Elizabeth Gonzalez James has written a book born from the beating heart of her obsession(s). A hybrid essay that both is and is not about Peter Sellers and the disastrous making of the 1967 Casino Royale film, Five Conversations About Peter Sellers offers insights into authenticity and identity, art and culture, and the legacies of terrible men. Gonzalez James recognizes that the value of such inquiry rises more from asking questions than in finding answers. This book doesn’t seek to make order from the drama and mayhem—both of old Hollywood and within the five narrators who come from one person—but instead embraces a new way to dwell in the chaos.”
—Samantha Edmonds, author of The Space Poet