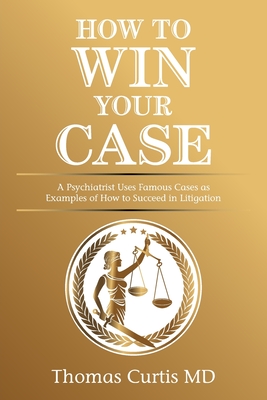 Dr. Thomas Curtis has been a practicing adult and child psychiatrist in the Los Angeles area since 1972. After a decade of private practice and court consultation in child custody cases, Dr. Curtis became an employee's doctor in the Workers' Compensation field. Could you imagine the uproar from his patients if he exposed them in this book? Instead, examples are drawn from famous cases and political contests. Defend against the defense-how much of the overwhelming DNA evidence against O. J. Simpson was considered by the jury? Answer: none. Why? Because the defense discredited the LAPD. You must defend against the defense. Overstatement kills-"l'm John Kerry, and l'm reporting for duty." Did this over-reach lead to Kerry being swiftboated out of a possible presidency? Winner of the Worst Witness in the World Award-- Brett Kavanaugh--scored 10 out of 10 in all 10 areas--defensiveness, insultingness, evasiveness, turning the question around, self-pitying exaggeration, protesting the procedures, repeating absurdities, attempting false sympathy, and creating a false alibi. Preparation, Preparation, Preparation --Did Ronald Reagan retain his presidency by a perfectly practiced one-liner? "I will not make an issue of age in this campaign. I am not going to exploit for political purposes my opponent's youth and inexperience." Similarly, did Michael Dukakis blow his debate for the presidency by uttering a singular one-line blunder? These are two of about 60 sections-attorneys, judges, testimony, settlements, injustice-all interspersed with lighter sections such as liars club, categorical de-niers, cover-up downfalls, litigation likables, questionably credible famous wit-nesses, and so on. Hopefully, Dr. Curtis caught your interest.