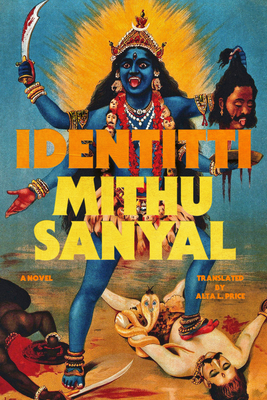 "Provocative and knotty . . . Identitti is a bracing story, one in which Sanyal refuses to give us the easy way out."
—Olivia Craighead, The New York Times

Nivedita (a.k.a. Identitti), a well-known blogger and doctoral student is in awe of her supervisor—superstar postcolonial and race studies South-Asian professor Saraswati. But her life and sense of self are turned upside down when it emerges that Saraswati is actually white. Nivedita’s praise of her professor during a radio interview just hours before the news breaks—and before she learns the truth—calls into question her own reputation as a young activist.

Following the uproar, Nivedita is forced to reflect on the key moments in her life, when she doubted her identity and her place in the world. As debates on the scandal rage on social media, blogs, and among her closest friends, Nivedita’s assumptions are called into question as she reconsiders the lessons she learned from her adored professor.

In her thought-provoking, genre-bending debut, Mithu Sanyal solicited the contributions and commentary of public intellectuals as if Saraswati were a real person. A darkly comedic tour de force, Identitti showcases the outsized power of social media in the current debates about identity politics and the power of claiming your own voice.

"Mithu Sanyal’s darkly comedic and linguistically inventive Identitti, which follows the life of a mixed-race graduate student who discovers her postcolonial studies professor is not South Asian but white, will satisfy those interested in satire and identity politics. Translated from the German by Alta L. Price."
—Words Without Borders

"[Identitti] is truly funny, often even cringe-funny. Possibly even Paul Beatty–level cringe-funny.... In keeping with this sense of real-world stakes and communal striving, Sanyal — in a truly impressive literary feat — brings the real world into her book quite literally.... Identitti is a sweet and hopeful yet critical book that lovingly pays tribute to the thought leaders who inspired not just Saraswati but also Sanyal ... If only we spoke to each other more — more honestly and with more historical knowledge — about difficult topics like racism, the book suggests, we might find a way to get along."
—Susan Bernofsky, Los Angeles Review of Books

"A provocative and knotty debut . . . a bracing story, one in which Sanyal refuses to give us the easy way out. Do not expect a facile demonization of those who shed their whiteness in favor of melanin . . . What Saraswati did, her so-called 'racial drag,' is wrong. But why, exactly? The question may seem preposterous — many would instinctively cry out, 'It just is!' — but for Sanyal it is one that begets other questions, ones about immigration, gender, theory, love. She has no intention of answering those questions for us, choosing rather to leave her readers with that collegiate thrill of having to figure it out for ourselves."
—Olivia Craighead, The New York Times

"A searing satire, one similar to those of Percival Everett or Paul Beatty.... Sanyal has created an exhaustively researched, entertaining, and timely novel about the ways social media and scandals dictate so much of the discourse about identity politics."
—Booklist, starred review

"Bursting with keen intelligence, irreverent humour and a riotous voice, Identitti delves into the knotty intersections of race and identity, authenticity and belonging, allyship and harm. Sanyal’s seamless blend of academic theory, blog posts, Twitter discourse and real-fictionalised voices pushes the possibilities of what a novel can be, offering a joyful polyphonic collaboration that captures our current reality."
—Isha Karki, winner of the Dinesh Allirajah Prize

"Provocative... surprisingly lively thanks to Sanyal’s knack for sending up academia and social media pile-ons and her canny interweaving of Hindu mythology.... A deliberately over-the-top but sensitive take on multiple touchy subjects."
—Kirkus Reviews

"From the first page, I knew Sanyal was going to take me to filthy, funny, strange places. She didn’t disappoint. Buy the ticket and take the wild ride as Identitti tries to make sense of race, belonging and truth."
—Jarred McGinnis, author of The Coward

"A mercilessly funny search for identity that spares nothing and nobody. Anyone who has ever asked themselves who they actually are (and why), will not only be smarter after reading it -- they're also guaranteed to be in a better mood."
—Alina Bronsky, author of The Hottest Dishes of the Tartar Cuisine

"A combination of campus novel, intellectual chamber play, blogosphere romp and satire in identity politics. You'll laugh out loud at least three times on each page. Mithu Sanyal has an incredible talent for showing both the effects of freedom of thought pushed to the extreme and the limits of discourse."
—Frankfurter Allgemeine Zeitung

"Sanyal actually manages to pack the whole identity-politics debate into one story -- and in such a way that you have to laugh on almost every page."
—ZDF

"Sanyal portrays her characters in the labyrinth of identity politics with elegance, delicious humor and deep knowledge of the issues. A book for our times."
—Der Tagesspiegel

"What should we do with all the rage about 'cancel culture' and self-righteousness? Read it off, laugh it off."
—Die Zeit

"Furious, programmatic, sharp-tongued, shape-shifting.... If only debates about cultural identity in the arts pages were conducted with the same sense of fun and self-irony as in Identitti."
—Der Tagesspiegel

"If you want to expand your knowledge and have a lot of fun in the process -- just go read a great book, read Identitti."
—Der Spiegel online

"Stimulating, clever, pleasurable reading, an invitation -- and a very funny one at that. Sanyal's art consists in capturing the whole discourse around identity so comically, so easily, and with a touch of magical realism."
—ARD

"This debut novel gets right into the current discourse on identity politics and racism. A coming-of-age campus novel in which academic theory tips over into fairy tales, while the plot cheerfully, entertainingly -- excitingly even -- strives towards its conciliatory end."
—Die Zeit

"The book of the hour. Sanyal doesn't provide easy answers, but asks mind-bending questions; she plunges the reader into a maelstrom of both-and; she combines academic discourse with personal stories into a hybrid of campus novel, Bildungsroman and postmodern collage."
—Neuer Zuricher Zeitung