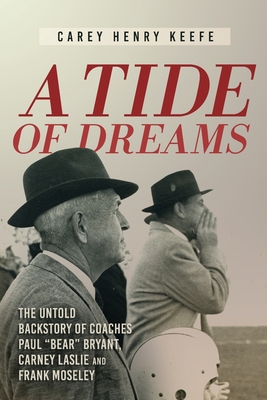 With the bombing of Pearl Harbor in December 1941, dreams of young men and women across the nation were sidelined while the country prepared for war. This was true, too, of Coaches Paul "Bear" Bryant, Carney Laslie, and Frank Moseley, three friends and former football teammates from the University of Alabama. Their plans to coach football together upended, they instead were selected to be part of a little-known contingent of fast-tracked ace coaches turned naval officers known as the "90-Day Wonders." The tough, military-style team conditioning they implemented at the Navy's Pre-Flight Training Centers resulted in a US fighting force which became known for being the toughest in the world.

Post-war, the three men reunited again, taking their brand of coaching to collegiate teams and transforming them into national champions. Spanning the 1920s until 1961, A Tide of Dreams is not so much about the game of college football as it is about friendship and loyalty, aspirations and dreams, and the intriguing blend of three personalities who loved the game. Author Carey Henry Keefe, granddaughter of Carney Laslie, has woven this revealing account from a treasure trove of personal letters and diaries, extensive library and newspaper archival research, and numerous interviews, creating an inside and fascinating look at the sport and what it cost for those who became the face of its success.