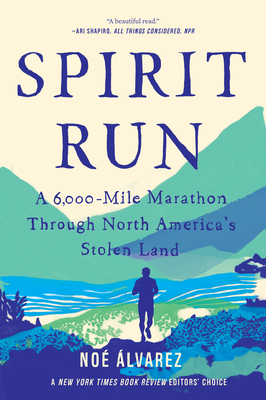 In this New York Times Book Review Editors’ Choice, the son of working-class Mexican immigrants flees a life of labor in fruit-packing plants to run in a Native American marathon from Canada to Guatemala in this "stunning memoir that moves to the rhythm of feet, labor, and the many landscapes of the Americas" (Catriona Menzies-Pike, author of The Long Run).

Growing up in Yakima, Washington, Noé Álvarez worked at an apple–packing plant alongside his mother, who “slouched over a conveyor belt of fruit, shoulder to shoulder with mothers conditioned to believe this was all they could do with their lives.” A university scholarship offered escape, but as a first–generation Latino college–goer, Álvarez struggled to fit in.

At nineteen, he learned about a Native American/First Nations movement called the Peace and Dignity Journeys, epic marathons meant to renew cultural connections across North America. He dropped out of school and joined a group of Dené, Secwépemc, Gitxsan, Dakelh, Apache, Tohono O’odham, Seri, Purépecha, and Maya runners, all fleeing difficult beginnings. Telling their stories alongside his own, Álvarez writes about a four–month–long journey from Canada to Guatemala that pushed him to his limits. He writes not only of overcoming hunger, thirst, and fear—dangers included stone–throwing motorists and a mountain lion—but also of asserting Indigenous and working–class humanity in a capitalist society where oil extraction, deforestation, and substance abuse wreck communities.

Running through mountains, deserts, and cities, and through the Mexican territory his parents left behind, Álvarez forges a new relationship with the land, and with the act of running, carrying with him the knowledge of his parents’ migration, and—against all odds in a society that exploits his body and rejects his spirit—the dream of a liberated future.

"This book is not like any other out there. You will see this country in a fresh way, and you might see aspects of your own soul. A beautiful run." —Luís Alberto Urrea, author of The House of Broken Angels

"When the son of two Mexican immigrants hears about the Peace and Dignity Journeys—'epic marathons meant to renew cultural connections across North America'—he’s compelled enough to drop out of college and sign up for one. Spirit Run is Noé Álvarez’s account of the four months he spends trekking from Canada to Guatemala alongside Native Americans representing nine tribes, all of whom are seeking brighter futures through running, self–exploration, and renewed relationships with the land they’ve traversed." —Runner's World, Best New Running Books of 2020

"An anthem to the landscape that holds our identities and traumas, and its profound power to heal them." —Francisco Cantú, author of The Line Becomes a River

NOÉ ÁLVAREZ was born to Mexican immigrant parents and raised working-class in Yakima, Washington. He holds degrees in philosophy and creative writing from Whitman College and Emerson College, respectively. He studied conflict analysis, peacemaking, and conflict resolution at American University and in Northern Ireland, received a fellowship at Princeton University’s Woodrow Wilson School, and researched U.S. drug policy, military aid, and human rights issues in Colombia’s Putumayo jungles. He lives in Boston, where, until recently, he worked as a security officer at the Boston Athenæum.

"Lyrical . . . Part travelogue, part traditional memoir . . . The story of the striving, first-generation kid made good is a familiar one; Álvarez makes his ache." —The New York Times Book Review

"More than another tale of blistered feet and dehydration. It's about the immigrant experience, about the indigenous experience—and finding one's place as a witness when you're neither." —Salon

"If ever a book deserved a broader readership in the UK, it is this gripping memoir . . . propulsive and deeply moving." —Jini Reddy, Resurgence & Ecologist Magazine

"A spellbinding narrative of his coming to terms with his place in America today . . . This literary tour de force beautifully combines outdoor adventure with a sharp take on immigration." —Publishers Weekly (starred review)

"This book is not like any other out there . . . A beautiful run." —Luís Alberto Urrea, author of The Devil's Highway