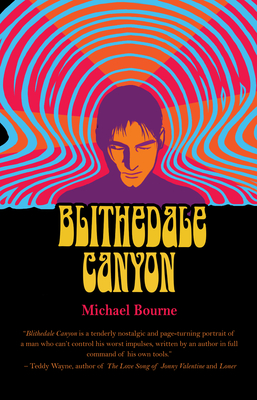 Trent Wolfer has blown it, in every possible way, over and over and over. And now he’s blowing it again. Fresh out of rehab, he’s back in his hometown working a dead-end job at a fast food joint and cutting out on his breaks to sneak airplane bottles of vodka and gin, when he looks up from his register one day to see Suze Randall, his closest friend from high school, now a radiant blonde single mother of two.

Set in a small, sun-drenched Northern California town shifting from hippie haven to moneyed paradise, Blithedale Canyon asks whether a man who has spent his whole life screwing up can stop long enough to avoid destroying a woman he loves. Michael Bourne’s funny, edgy debut is a literary love story for every man who has ever wondered why he keeps smashing up the things he cares about, and for every woman who’s ever wondered what was going on in the head of that guy she spent her twenties trying to fix.

Michael Bourne is a contributing editor at Poets & Writers Magazine and a staff writer at The Millions. He has written for The New York Times, The Globe and Mail, Literary Hub, and Salon, and his fiction has appeared in more than a dozen literary magazines including december, The Southampton Review, and Tin House. Blithedale Canyon is his first novel.

"Michael Bourne’s debut novel is an ode to the pleasures and pains of the return to the familiar, to the gravitational pulls of addiction, old friends, and Springsteen on a car stereo, but mostly of home. Blithedale Canyon is a tenderly nostalgic and page-turning portrait of a man who can’t control his worst impulses, written by an author in full command of his own tools." —Teddy Wayne, author of The Love Song of Jonny Valentine and Loner


"We are surrounded by stories about winning, but where are all the great modern novels about failure? Blithedale Canyon is about Trent Wolfer who has lost almost everything. He moves back home to start fresh and quickly finds himself at risk of losing it all again. Bourne is brave enough to be honest and honest enough to write an unvarnished truth. This novel brims with humor, it's cathartic, original, and lonely. It's a wild ride." —Claire Cameron, author of The Last Neanderthal and The Bear, a #1 Canadian bestseller

"Trent Wolfer is a screwup, but one so smart and observant and oddly self-aware that we can't help rooting for him – and noting the ways in which we're a little like him. Trent wants more than anything to find some truth amid his own and others' bullshit, and we're kept on edge as he keeps losing and finding and losing that truth again. The perfect story for our age of con artists and systemic scams." —Pamela Erens, author of Eleven Hours and The Virgins

"Blithedale Canyon is a hard look at the destruction of American capitalism in the lives of the privileged and the devoured. No one here is easy to love, and yet Bourne writes each of his damaged, difficult characters with a clear-eyed complexity that readers will recognize. By the last page, readers will be asking an essential question of our American moment: Can there be any redemption without honesty?" —Kirsten Sundberg Lunstrum, author of What We Do With the Wreckage and This Life She’s Chosen

"A vivid portrait of Northern California at the turn of the 21st century ... A story of love, addiction, regret, and hope. I couldn't put it down." —Edan Lupecki, author of California and Woman No. 17