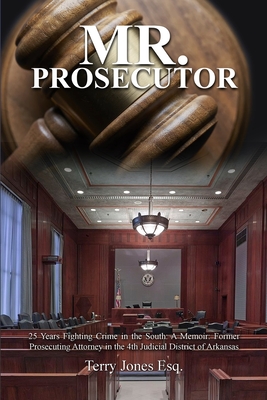 For more than 20 years, Terry Jones began each trial with this opening statement: "Good morning, my name is Terry Jones. I am the Prosecuting Attorney for the 4th Judicial District and in that capacity I represent people of the State of Arkansas."

His memoir is a frank and entertaining insider's look at the American justice system. From the sensational Billie Jean Phillips murder trial, to religious con men, to brutal assault charges, "The cases described here are authentic, although some of the names have been changed to protect the innocent, or the stupid, or because I could not remember who the hell they were."

Terry Jones is a small-town lawyer who has been married for 48 years to a 3rd grade teacher. He learned to sail in San Diego Bay, owned part of a sailboat in the Caribbean (Tortola), and over a period of nine years, he sailed every island from Puerto Rico to Granada. He is a long time member of the Fayetteville Exchange Club.

Jones is a grill master and flower gardener, who rides a scooter every day to exercise class. He has two grown children, loves to play bad golf, and is a member of a curmudgeons' round table on Wednesdays.