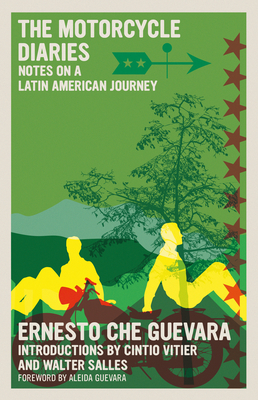 A New York Times bestseller
With a new introduction by The Motorcyle Diaries filmmaker Walter Salles, and featuring 24 pages of photos taken by Che.

The Motorcycle Diaries is Che Guevara's diary of his journey to discover the continent of Latin America while still a medical student, setting out in 1952 on a vintage Norton motorcycle together with his friend Alberto Granado, a biochemist. It captures, arguably as much as any book ever written, the exuberance and joy of one person's youthful belief in the possibilities of humankind tending towards justice, peace and happiness.

After the release in 2004 of the exhilarating film of the same title, directed by Walter Salles, the book became a New York Times and international bestseller.

This edition includes a new introduction by Walter Salles and an array of new material that was assembled for the 2004 edition coinciding with the release of the film, including 24 pages of previously unpublished photos taken by Che, notes and comments by his wife, Aleida Guevara March, and an extensive introduction by the distinguished Cuban author, Cintio Vitier.

"As his journey progresses, Guevara's voice seems to deepen, to darken, colored by what he witnesses in his travels. He is still poetic, but now he comments on what he sees, though still poetically, with a new awareness of the social and political ramifications of what's going on around him."—January Magazine

"Our film is about a young man, Che, falling in love with a continent and finding his place in it."
—Walter Salles, director of the film version of The Motorcycle Diaries

"All this wandering around 'Our America with a Capital A' has changed me more than I thought."
—Ernesto Che Guevara, from The Motorcycle Diaries

"Most of the book is not explicitly political, but Guevara's profound radicalization is shown through his growing indignation toward American imperialism, the oppression of Indigenous people, and “profound tragedy circumscribing the life of the proletariat the world over” that he witnesses firsthand during his travels. Guevara went on to join Fidel Castro’s 1959 revolution against the Cuban government, eventually becoming the minister of industry in the new one-party Communist state. The Motorcycle Diaries is a coming-of-age story, an intimate glimpse at the beginning of one boy’s transformation into a man who some remember as a murderer and some remember as a martyr."
— Calla Walsh, Teen Vogue