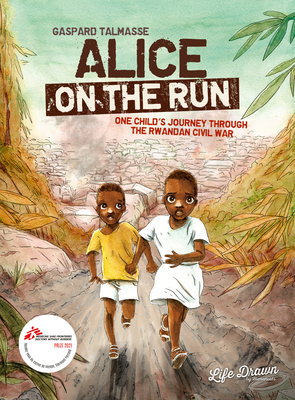 The true odyssey of a young child, Alice Cyuzuzo, as she traverses the roads of Zaire to seek refuge from the civil war that has struck her native Rwanda.

Gitarama, the Southern Province of Rwanda, 1994. Five-year-old Alice enjoys a peaceful childhood with her parents and little sisters, but life as she knows it is about to change forever as the genocide of the Tutsis erupts, forcing her to flee her village with her family.

It is on the hot roads of the Democratic Republic of Congo, known then as Zaire, that Alice grows up, bouncing from one refugee camp to another, seeking some semblance of a normal life in between violent attacks, with death always lurking around the corner.

With Alice, Gaspard Talmasse delivers a singular testimony, capturing with painful emotion a relentless world as seen thorough the eyes of an innocent child: one who grew up to become the author's own life partner.

Gaspard Talmasse is a Belgian artist. He graduated in arts plastiques at the Saint-Luc Institute in Liege, with a specialization in comics.

Since February 2018, he has regularly collaborated with Otra Vista as a storyboarder, director and cartoon animator.