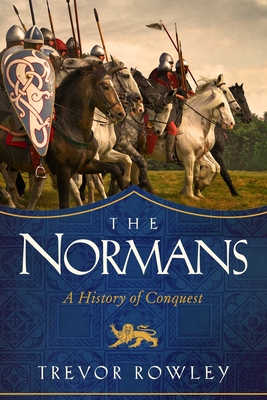 By Trevor Rowley
$27.95
Email or call for price

A powerful and evocative portrait of the Norman Conquest of Europe, revealing the permanent cultural and political legacy that resulted in their ascendency.

The Norman’s conquering of the known world was a phenomenon unlike anything Europe had seen up to that point in history.

They emerged early in the tenth century but had disappeared from world affairs by the mid-thirteenth century. Yet in that time they had conquered England, Ireland, much of Wales and parts of Scotland. They also founded a new Mediterranean kingdom in southern Italy and Sicily, as well as a Crusader state in the Holy Land and in North Africa. Moreover, they had an extraordinary ability to adapt as time and place dictated, taking on the role of Norse invaders to Frankish crusaders, from Byzantine overlords to feudal monarchs.

Drawing on archaeological and historical evidence, Trevor Rowley offers a comprehensive picture of the Normans and argues that despite the short time span of Norman ascendancy, it is clear that they were responsible for a permanent cultural and political legacy.

Trevor Rowley has combined his career in education with a lifelong love of landscape history and archaeology. His publications include Villages in the Landscape, The High Middle Ages and Norman England, published by British academic presses. The Normans is his first book to be published in America.

"Rowley offers a thorough history of the Norman Dynasty from its creation and encompasses all their conquests across Europe. I’d recommend The Normans: A History of Conquest to a medieval history new-comer or a seasoned historian. It has something for everyone."
— Medieval Archives