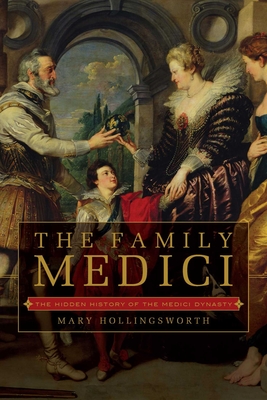 By Mary Hollingsworth
Out of Print

A fresh, revelatory, and shockingly revisionist narrative of the rise and fall of the House of Medici, by the acclaimed author of The Cardinal’s Hat and The Borgias.

Having founded the bank that became the most powerful in Europe in the fifteenth century, the Medici gained massive political power in Florence, raising the city to a peak of cultural achievement and becoming its hereditary dukes. Among their number were no fewer than three popes and a powerful and influential queen of France. Their influence brought about an explosion of Florentine art and architecture. Michelangelo, Donatello, Fra Angelico, and Leonardo were among the artists with whom they were socialized and patronized.

Thus runs the "accepted view” of the Medici. However, Mary Hollingsworth argues that the idea that the Medici were enlightened rulers of the Renaissance is a fiction that has now acquired the status of historical fact. In truth, the Medici were as devious and immoral as the Borgias—tyrants loathed in the city they illegally made their own. In this dynamic new history, Hollingsworth argues that past narratives have focused on a sanitized and fictitious view of the Medici—wise rulers, enlightened patrons of the arts, and fathers of the Renaissance—but that in fact their past was reinvented in the sixteenth century, mythologized by later generations of Medici who used this as a central prop for their legacy.

Hollingsworth's revelatory re-telling of the story of the family Medici brings a fresh and exhilarating new perspective to the story behind the most powerful family of the Italian Renaissance.

Mary Hollingsworth is a scholar of the Italian Renaissance. She is the author of The Cardinal's Hat; The Borgias: History's Most Notorious Dynasty; and Patronage in Renaissance Italy: From 1400 to the Early Sixteenth Century. She divides her time between Italy and England.

"Vivid and well-researched. Hollingsworth's implication is correct and praiseworthy—that we should remember the Medici for what they were, not for what they wanted us to think they were."
— Christian Science Monitor

"Hollingsworth’s clear, concise family chronology serves as an excellent introduction or handy reference guide to one of the Renaissance’s most infamous families."
— Publishers Weekly (starred)

"A fascinating warts-and-all history of the rise and fall of the Medici. Hollingsworth effectively debunks the myths surrounding this legendary family. A vital acquisition for anyone who studies the Renaissance and seeks the true role of the Medici in the history of Florence."
— Kirkus Reviews (starred)