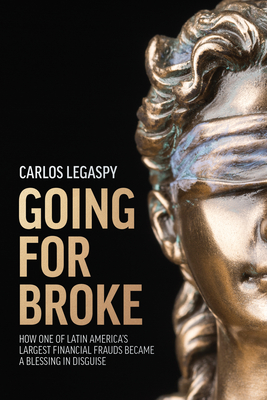 HOW ONE MAN FOUGHT AGAINST LARGE-SCALE FINANCIAL CORRUPTION ...AND WON

When Carlos Legaspy, Mexican-American owner of a rising broker-dealer, uncovered the inner workings of a nine- figure Ponzi scheme, he thought he was doing the right thing by sounding the alarm. Instead, the fraud's perpetrators shifted blame onto him, touching o a two-year saga of betrayal, fraud, and high-stakes financial drama that would extend over international borders and impact some of Wall Street's biggest players--and bring Legaspy's own business and reputation to the brink of destruction.

Going for Broke chronicles Legaspy's rise from the grandson of a junkyard owner in Mexico to the head of a successful broker-dealer to becoming an overnight pariah facing $40 million in legal claims for malfeasance he did not commit. To clear his name, Legaspy wages a multifront war against conniving attorneys, scheming financial advisors, aggressive regulators, and deep-pocketed banks in a race to save his company before the scandal leaves him bankrupt and his company in ruins. Legaspy's tale reminds us that, even in a cutthroat industry where "guilty until proven innocent" takes the place of due process and allies are few and far between, you're not down for the count as long as you can get back up and throw one more punch.