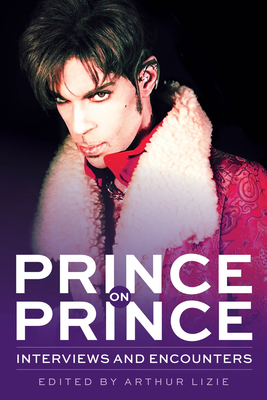 Prince on Prince gets behind the controversies to tell the Prince story in his own words.

Prince is among the most respected and influential entertainers of the twentieth century, breaking sexual, racial, and creative barriers throughout his almost forty years in the spotlight.

He was a multitalented studio artist, a master songwriter who produced and performed almost all of his own music on yearly LPs and countless singles and videos. He was one of the most dynamic live performers ever to hit the stage, a world-class dancer, and musician who’s still remembered for the best Super Bowl halftime performance in history. He fought for artists’ rights, changed his name to a glyph, and took a star turn in the Oscar-winner Purple Rain.

But for all this, he was a quiet and private individual, reluctant to talk about the work he felt should speak for itself. This volume offers a chronological look at some of Prince’s most entertaining and revealing interviews, from 1978 and the release of his debut LP, For You, to a 2015 interview conducted only months before his untimely death at the age of fifty-seven.

Prince’s memoir was left incomplete, but this volume offers a view of the man as he sought to portray himself in his own words to journalists of every status throughout his career.

Arthur Lizie is a professor of communication and media studies at Bridgewater State University. He is the author of Prince FAQ: All That's Left to Know About the Purple Reign and Neil Young on Neil Young: Interviews and Encounters. He lives in Massachusetts.

“Prince was not only an incredible, gifted music maker. What this book shows is that his interviews were also performances. Lizie has assembled a wide range of material, including encounters from press conferences, websites, and radio shows. As the archive shows, in the face of an ongoing barrage of sometimes bizarre, sometimes banal, and sometimes poignant questions, Prince didn’t always tell the truth—though there were times where, palpably, he did. After finishing this book, I felt I’d gotten to know one of popular music’s most forward-thinking contributors much better.” —Dr. Mark Duffett, Associate Professor of Music, Media, and Performance, University of Chester

“I was on the verge of believing I’d read everything there was to know about Prince, when along comes Prince on Prince. This book is a must-read for anyone who wants to learn more about a man who was an enigma to both friends and fans.” —Laura Tiebert, coauthor of The Rise of Prince: 1958–1988


"This book is in some ways the closest you will get to sitting down and talking with Prince. A must-have for anyone who wants to learn more about this one-of-a-kind, spectacular, creative force of nature, the likes of which we have never seen or heard before and never will again." —Jeff Munson, former Paisley Park staff and art director

“Prince on Prince provides the reader with a fascinating collection of interviews from every stage of Prince’s prolific career. Thoughtfully selected, they provide deep insight into one of the most influential artists of our time. Both longtime fans and those new to his work will find a new understanding of a complex persona.” —Dr. Kirsty Fairclough,  coeditor of Prince and Popular Music