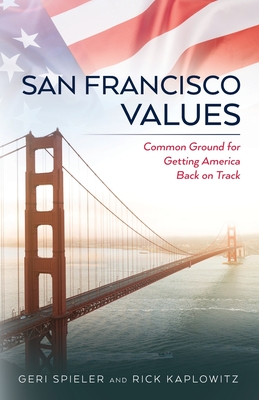 The Values That Unite Americans Across The Political Spectrum

Family-friendly. Equality-based. Patriotic. All-American values at the bedrock of the trailblazing San Francisco Bay Area, and yet also perspectives routinely attacked as a threat to our nation's morals and ideals.

In SAN FRANCISCO VALUES: Common Ground for Getting America Back on Track, Spieler and Kaplowitz delve, from both liberal and conservative perspectives, into the complex and sometimes contradictory values that define the United States.

Proud San Francisco Bay Area residents who care about America's future, the coauthors draw on research, facts, and laws to show how San Francisco values and political voices have shaped national opinion and policy on major issues. Topics include:

=> Why San Francisco Leads the Nation in Innovation

=> Celebrating Love and Families in All Their Diversity

San Francisco Values concludes each chapter with Action Steps to help each American consider fundamental personal and national values, and how we can get beyond ad-hominem attacks, before going to the polls.