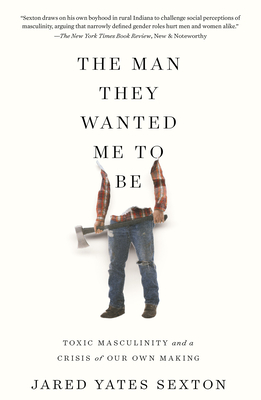 Based on the provocative and popular New York Times op–ed, this memoir alternates between the examination of a working–class upbringing and a cultural analysis of the historical, psychological, and sociological sources that make up the roots of toxic masculinity and its impact on society.

As progressivism changes American society, and globalism shifts labor away from traditional manufacturing, the roles that have been prescribed to men since the Industrial Revolution have been rendered obsolete. Donald Trump's campaign successfully leveraged male resentment and entitlement, and now, with Trump as president and the rise of the #MeToo movement, it’s clear that our current definitions of masculinity are outdated and even dangerous.

Deeply personal and thoroughly researched, the author of The People Are Going to Rise Like the Waters Upon Your Shore has turned his keen eye to our current crisis of masculinity using his upbringing in rural Indiana to examine the personal and societal dangers of the patriarchy. The Man They Wanted Me to Be examines how we teach boys what’s expected of men in America, and the long–term effects of that socialization―which include depression, shorter lives, misogyny, and suicide. Sexton turns his keen eye to the establishment of the racist patriarchal structure which has favored white men, and investigates the personal and societal dangers of such outdated definitions of manhood.

"By carefully and soberly examining his own story, Sexton deconstructs American life and gives many examples of how pervasive toxic masculinity is in our culture." ―Henry Rollins, Los Angeles Times

"This book is critically important to our historical moment . . . Crackles with intensity and absolutely refuses to allow the reader to look away for even a moment from the blight that toxic masculinity in America has wrought." ―Nicholas Cannariato, NPR

Jared Yates Sexton is the author of The People Are Going to Rise Like the Waters Upon Your Shore. He is a contributing political writer at Salon, and his writing has appeared in The New York Times, The New Republic, and elsewhere. He is an associate professor of creative writing at Georgia Southern University. You can follow him at @JYSexton.

Praise for The Man They Wanted Me to Be

Finalist for the Georgia Writers Association Author of the Year

“This book is critically important to our historical moment. It's also really good—and Sexton's voice is unrelentingly present in it. It crackles with intensity and absolutely refuses to allow the reader to look away for even a moment from the blight that toxic masculinity in America has wrought . . . What also makes The Man They Wanted Me to Be work so well is that it's largely a personal story . . . How do we as a culture get past toxic masculinity when, as Sexton suggests, its paragon occupies the Oval Office and its pathology is empowered? Sexton's great book points the way.” —Nicholas Cannariato, NPR

“It is ultimately his confrontation of the forces that raised him—and the traps he willingly entered into—which give his reporting a narrative pulse and humanity that the field data only hint at . . . By carefully and soberly examining his own story, Sexton deconstructs American life and gives many examples of how pervasive toxic masculinity is in our culture, like an aerosol spray so micro–particulate, it escapes detection and the mention of it is easily argued away as 'political correctness' or being 'soft.'“ —Henry Rollins, Los Angeles Times

“A real page–turner . . . His lens ranges from micro to macro to capture American progressivism in action, the global labor shift from traditional manufacturing, and roles prescribed to men since the Industrial Revolution that are becoming obsolete. It examines how we teach boys what’s expected of men in America, and the long–term effects of this socialization.” —Jerry Davich, Chicago Tribune

“[Sexton's] honest and heartbreaking account of never quite being able to shed the damaging gender demands he was raised with, along with the cultural and historical context that he provides, provides a blueprint for how men can confront the harm that toxic masculinity has brought them. I don't consider it critical hyperbole to say that a book like this can save lives.” —Erin Keane, Salon

"Part memoir and part cultural critique, in this book Sexton examines his working-class background, the socio-historical sources that result in the formation of toxic masculinity, and the implications of male chauvinism on society." —Dee Das, BookRiot

“In this moving memoir of growing up steeped in the toxic masculinity of 1980s working–class rural Indiana, Sexton (The People Are Going to Rise Like the Waters Upon Your Shore) gives an emotionally intimate demonstration of the thesis that 'men have actively overcompensated for their insecurities, so much so that they have endangered themselves, the people they love, and their society as a whole' . . . This thoughtful and powerful consideration of the damage done by traditional masculinity to its ostensible beneficiaries will reward readers’ attention.” —Publishers Weekly (starred review)

“This book exposes the true cost of toxic masculinity—depression, suicide, misogyny, and a shorter lifespan for men—and takes aim at the patriarchal structures in American society that continue to uphold an outdated ideal of manhood.” —Kate Scott, Book Riot

“The Man They Wanted Me to Be is the kind of book all parents should read. One also hopes it finds its way into the hands of men whose anger masks so poorly how lost they are. The tone of Sexton’s writing could not be more reasonable or empathetic.” —James Tate Hill, Literary Hub