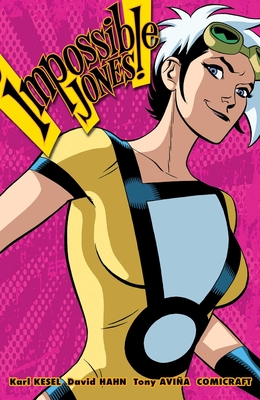 Isabelle Castillo is a thief who gets amazing powers… is mistaken for a superhero… and runs with it! With no intent of giving up her criminal ways, of course, since her powers make robbery easier than ever! Even better: the police gladly tell her what they’re doing, and store owners are happy to show her their security systems! All she has to do is make sure no one suspects the truth— especially New Hope City’s real superheroes and villains! It’s a high-stakes, high-wire balancing act, but it’s not impossible…

KARL KESEL loves his job far more than he has any right to. He has written, inked, and occasionally penciled: Superman, Superboy, Harley Quinn, Spider-Man, Suicide Squad, and many others. He also created King Shark, hands down his biggest contribution to popular culture. His current obsessions are his creator-owned comics with Tom Grummett— the Jack-Kirby-does-the-X-Files-esque SECTION ZERO— and David Hahn— the Ringo Award nominated IMPOSSIBLE JONES. He lives in Portland, Oregon with his wonderful wife Myrna, their energetic son Isaac, and cute-as-a-bug daughter Eliza. He really can’t complain about much.

DAVID HAHN has illustrated Spider-man Loves Mary Jane, Batman ’66 Meets Wonder Woman ’77, Midnight Western Theater, as well as The Batman Handbook. He was nominated for both Eisner and Ignatz Awards for his creator-owned comic series Private Beach. An avid indoorsman who loves video games, David has somehow found himself living in bear and cougar country in the backwoods of Montana.

TONY AVINA is a freelance illustrator, colorist and designer. Born and raised in the South Bay area of LA, he has worked for some of the greats— ranging from DC Comics (Batman, Green lantern) to Dynamite (The Boys).