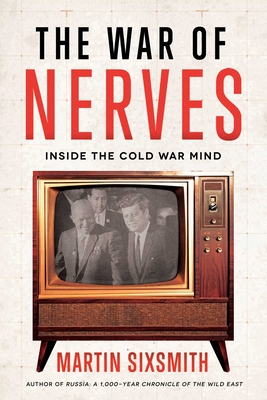 A major new history of the Cold War that explores the conflict through the minds of the people who lived through it.

More than any other conflict, the Cold War was fought on the battlefield of the human mind. And, nearly thirty years since the collapse of the Soviet Union, its legacy still endures—not only in our politics, but in our own thoughts and fears.

Drawing on a vast array of untapped archives and unseen sources, Martin Sixsmith vividly recreates the tensions and paranoia of the Cold War, framing it for the first time from a psychological perspective. Revisiting towering, unique personalities like Khrushchev, Kennedy, and Nixon, as well as the lives of the unknown millions who were caught up in the conflict, this is a gripping narrative of the paranoia of the Cold War—and in today's uncertain times, this story is more resonant than ever.

Martin Sixsmith studied Russian at Oxford, Harvard, the Sorbonne, and in St Petersburg. He witnessed the end of the Cold War first-hand, reporting for the BBC from Moscow during the presidencies of Gorbachev and Yeltsin. He is the author of two novels and several works of non-fiction, including Philomena (a New York Times bestseller) and Russia: A 1,000 Year Chronicle of the Wild East. Martin lives in London.

“There have been many histories of the cold war, but the virtue and originality of Mr. Sixsmith’s is to see almost every aspect of the stand-off in psychological terms. Deranged Stalin, volatile, bombastic Nikita Khrushchev, plodding, insecure Leonid Brezhnev, Mikhail Gorbachev’s desperate optimism—he sketches the leaders’ states of mind, and the means used to stimulate fear of ‘the other’… The author, a Russian scholar and journalist who, as the BBC’s Moscow correspondent, covered Mr. Gorbachev’s presidency and Boris Yeltsin’s, uses the tools of psychoanalysis to illuminate events and motivations.”
— The Economist

“An intriguing new history about how the Cold War was primarily a conflict of psychology. Sixsmith, who reported on Russia for the BBC during the 1980s, delves into the psychological issues of the time, especially the thinking of the leaders and the reactions of ordinary people. There are useful lessons for the current geopolitical landscape, and the author’s essential point—know yourself in order to know the Other—is as valuable as ever. An original analysis of a crucial period of history, providing important context for the present.”
— Kirkus Reviews

“As well as many illuminating anecdotes from his time as a journalist in Russia, a country about which he clearly cares deeply, his book is filled with fascinating insights into the psychology of one of the most dangerous periods in world history. Importantly, Sixsmith reminds us that we continue to live with the emotional trauma of the cold war, and today’s decision-makers are no better at examining their psychological assumptions than yesterday’s leaders.”
— The Guardian

"In War of Nerves, Sixsmith examines the reasons why the relationship between the [US and Russia] has been—and is—so fraught, citing a number of both similarities and distinct differences as the root causes. The similarities include the fact that both countries are very large geographically, with a strong expansionist mindset. The differences are more pronounced, in fact even diametrically opposed. Sixsmith explores how these and other issues have informed the historical interactions between the two countries from WWII to Reagan and beyond, and how conflicts between the two could possibly be resolved—or could possibly be perpetually inevitable. These insights are especially relevant given recent developments."
— Booklist

"Novelist and reporter Sixsmith (Russia) deconstructs the psychology of the Cold War in this revelatory history. Fluid prose and astute, timely analysis into the history behind Vladimir Putin’s “restorative nostalgia” make this a vital study of world affairs."
— Publishers Weekly, starred review

Praise for Martin Sixsmith’s Russia: A 1,000 Year Chronicle of the Wild East:

"A lively chronicle.”
— Orlando Figes, author of The Europeans

"Sixsmith has the knack of delivering complex material with a clear voice."
— The Times (London)

"Russia, a 1,000 Year Chronicle of the Wild East contains many of the required ingredients to become the leading popular history of Russia. Colloquial, persona,l and anecdotal in style. Well researched and factually sound.”
— The Times Literary Supplement

“The extraordinary story of an extraordinary woman. It reveals a remarkable human being with astonishing fortitude and a truly humbling willingness to forgive. I hope Philomena’s heroic search and her courage in allowing her story to be told will bring comfort to all who have suffered a similar fate.”
— Judi Dench

“A searingly poignant account of forced adoption and its consequences.”
— Kirkus Reviews (starred)

“A powerful testament to the strength of the bond between mother and child.”
— Shelf Awareness