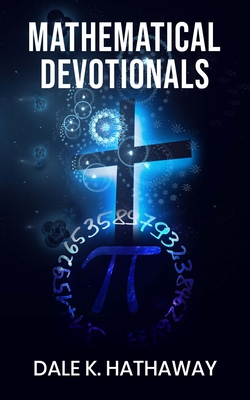 Mathematical Devotionals serves as a guide to connect Christianity with mathematics through a year's worth of inspirational prompts and meditations. Each devotional is self-contained, including scripture verses and an image. The devotionals fall into four categories:

- Devotionals based on quotes either by a mathematician or about mathematics

The devotionals use mathematics, statistics, computer science, and even occasionally stray into the other science areas to provide a variety of engaging connections to Christianity. The book is intended to show how mathematics and other scientific fields should be considered complementary to Christianity rather than adversarial.

﻿Mathematicians, scientists, and folks intrigued by the wonders of the physical universe and the human spirit may be blessed by walking along with Professor Dale Hathaway throughout a year----especially if they have been charged from on high to integrate their faith with their teaching. Each pithy offering combines a mathematical insight, a life thought, and a graphical image into a holistic veritable balm of Gilead homily for each new day.

Dr. Dale Hathaway inspires readers with this one-of-a-kind devotional book that makes a connection between God the Creator and Mathematics, which the Astronomer Galileo Galilei called "...the language in which God has written the universe." Readers will be blessed daily with scripture, quotes from famous mathematicians, relevant images, and a thoughtful devotion on each topic. Whether you are learning about a notable mathematician, a new mathematical concept, or how these concepts can help you better understand the mind of God, I pray you will be blessed by these Mathematical Devotionals.

Dale K. Hathaway has been a faculty member, department chair, and recently selected as the Associate Dean for the Martin D. Walker School of STEM (Science, Technology, Engineering, and Mathematics) at Olivet Nazarene University in Bourbonnais, Illinoissince 1989. He received his Ph.D. in Mathematics from Boston University. Mathematically, he has a passion for finding and presenting "Birthday Problem" connections and, as a Christian, he loves finding ways to connect his profession with his faith.