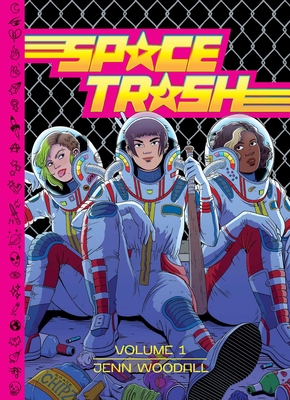 In Jenn Woodall's debut graphic novel series, three teenagers attending school on the moon try to keep their boredom and resentments at bay as they stumble across an exciting secret that could change the course of their future.

In 2115, Earth has been abandoned as a lost cause and mankind has moved on to space colonization. At a decrepit high school on the moon for underprivileged youth, Stab, Yuki and Una are three teenagers who try to keep their boredom and resentment at bay by fighting rival gangs and cliques, hanging out, sleeping their way through class, all while trying to avoid punishment from the Student Council.

Fights over turf, respect and snacks lead to unearthing an exciting secret, but will their friendship be strong enough to forge a new future?

Jenn Woodall is an award-winning comics creator and illustrator who lives in Toronto, Ontario. She grew up in Brampton, where she devoured comics and manga from her local mall and scrounged for bootleg anime VHS tapes at her local Chinatown. She moved to Toronto for school, where she studied fashion design, then Illustration, at OCADU. She works as a freelance illustrator and has worked with Silver Sprocket, IDW Publishing, Quirk Books, and others. She has a small cat named Boo.

"Space Trash Volume 1 is an exciting and dramatic graphic novel whose teenage cast contends with a space-going mystery."
— Foreword Reviews

A funny choice for teens looking for stories about imperfect girls just trying to get through high school—with a side of space and adventure.
— Booklist