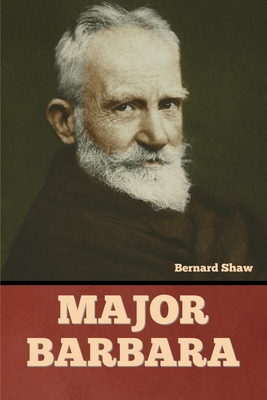 By Bernard Shaw
for information about purchasing this book, please contact orders@bookpassage.com

Major Barbara is a three-act English play by George Bernard Shaw, written and premiered in 1905 and first published in 1907. The story concerns an idealistic young woman, Barbara Undershaft, who is engaged in helping the poor as a Major in the Salvation Army in London. For many years, Barbara and her siblings have been estranged from their father, Andrew Undershaft, who now reappears as a rich and successful munitions maker. Undershaft, the father, gives money to the Salvation Army, offending Major Barbara, who does not want to be connected to his "tainted" wealth. However, the father argues that poverty is a worse problem than munitions, and claims that he is doing more to help society by giving his workers jobs and a steady income than Major Barbara is doing to help them by giving them bread and soup.

The play script reprises several typical "Shavian" moves in lacking apostrophes on contractions and other punctuation, by having a didactic introductory essay explaining the play's themes, and by bending some rules of play scripting for literary purposes; for example, two characters are listed as "The Woman" and "The Man" before Shaw gives them names, for dramatic effect. As well, lines in dialect English are written phonetically (Bill Walker jeers, "Wot prawce selvytion nah?", "What price salvation now?"). (wikipedia.org)