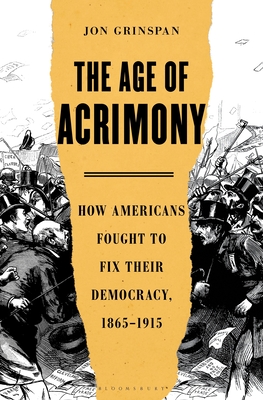 A penetrating, character-filled history “in the manner of David McCullough” (WSJ), revealing the deep roots of our tormented present-day politics.

Democracy was broken. Or that was what many Americans believed in the decades after the Civil War. Shaken by economic and technological disruption, they sought safety in aggressive, tribal partisanship. The results were the loudest, closest, most violent elections in U.S. history, driven by vibrant campaigns that drew our highest-ever voter turnouts. At the century’s end, reformers finally restrained this wild system, trading away participation for civility in the process. They built a calmer, cleaner democracy, but also a more distant one. Americans’ voting rates crashed and never fully recovered.

This is the origin story of the “normal” politics of the 20th century. Only by exploring where that civility and restraint came from can we understand what is happening to our democracy today.

The Age of Acrimony charts the rise and fall of 19th-century America’s unruly politics through the lives of a remarkable father-daughter dynasty. The radical congressman William “Pig Iron” Kelley and his fiery, Progressive daughter Florence Kelley led lives packed with drama, intimately tied to their nation’s politics. Through their friendships and feuds, campaigns and crusades, Will and Florie trace the narrative of a democracy in crisis. In telling the tale of what it cost to cool our republic, historian Jon Grinspan reveals our divisive political system’s enduring capacity to reinvent itself.

Jon Grinspan is Curator of Political History at the Smithsonian's National Museum of American History. He is the author of the award-winning The Virgin Vote: How Young Americans Made Democracy Social, Politics Personal, and Voting Popular in the 19th Century. He frequently contributes to the New York Times, and has been featured in The New Yorker, the Washington Post, and elsewhere. He lives in Washington, D.C.

“It’s not every day — it’s not every year — that a book appears that upends all the guiding historical views of the age. Then again, Jon Grinspan’s The Age of Acrimony is that rare disturbance in the waters of the historiography of 19th-century America. It is an engaging, inviting, and ultimately disruptive story of what happened between the assassination of Lincoln and the sinking of the Lusitania.” - Boston Globe

“The portrait of a time—not so unlike our own—when partisan discord dominated American life … In the manner of David McCullough, [Grinspan] captures many of his themes in the story of a single figure whose career … ranged across a broad spectrum of not just political but also cultural issues … [Today] both parties behave like enemies in a cultural civil war, fighting it out on social media rather than torchlight parades. Where will it all end? To judge by Mr. Grinspan’s account, only when old causes and divisions are replaced by those of new generations—after another decade or two of acrimony.” - The Wall Street Journal

"For those that love the messy politics of the Gilded Age or the complicated history of industrial capitalism, this book will prove fascinating … Grinspan’s history is wonderfully nuanced and balanced ... will give you hope that today’s problems are not as apocalyptic as they sometimes feel. After all, the nation survived." - Smithsonian Magazine's Scholars' Favorite Books of 2021

“Brisk, edifying . . . Grinspan enlists a large cast of tenacious optimists and mercurial opportunists. Together, their biographies illuminate a half-century of strife and grudging reform . . . Grinspan has skillfully assembled a roster of memorable personalities who embody some of the era's vicissitudes. The people in these pages didn't ‘fix’ the republic's problems, of course…Frequently, though, they prodded America to fulfill its founding promises, stepping into starring roles in this admirable portrait of a nation enduring a prolonged identity crisis.” - Minneapolis Star-Tribune

“Not all historians write with the verve and dash of Grinspan. [His] history of the era does not despair for democracy…Grinspan contends that 20th-century democracy has grown more reasonable, more enlightened, and more transparent.” - Washington Independent Review of Books

“American history is dominated by father-son duos, but in the archives Jon Grinspan saw the powerful story of a forgotten political dynasty: Congressman William Kelley and his daughter, influential labor activist Florence Kelley. We have so much to learn from this compelling account of a family and democracy in crisis, unearthed by Grinspan just in time.” - Alexis Coe, New York Times-bestselling author of YOU NEVER FORGET YOUR FIRST: A Biography of George Washington

“Jon Grinspan's dazzling The Age of Acrimony conjures for readers a swirling American panorama—the agitation of the bosses, cranks, crusaders, and legions of voters who fervently debated the direction of democracy. Tracing how the convulsive campaign culture of the Gilded Age gave way to a more managed, restrained politics, Grinspan deftly assesses what was gained and lost in this transition. In captivating prose, he offers insight into the abiding tension between campaigning and governing—and a timely reminder of the resilience of our political system.” - Elizabeth R. Varon, Langbourne M. Williams Professor of American History, University of Virginia, and author of ARMIES OF DELIVERANCE

“You might imagine that a book called The Age of Acrimony is about our politics right now. But the genius of Jon Grinspan’s work is that he brings to life, with spirit and sensitivity, an earlier era of deep political engagement and division to help us understand, as he puts it, ‘how we got that “normal” twentieth-century democracy to begin with.’ This is a brilliantly researched, beautifully written, ground-level portrait of what politics felt like during a crucial era that is largely lost to us.” - E.J. Dionne, author of OUR DIVIDED POLITICAL HEART and CODE RED

“Jon Grinspan’s account of a critical era of American politics is fresh, compelling, and important. His skillful narrative reveals the origins of conflicts that echo in our own time.” - Edward L. Ayers, Tucker-Boatwright Professor of the Humanities, University of Richmond, and Lincoln Prize-winning author of THE THIN LIGHT OF FREEDOM

“The Age of Acrimony arrives at the perfect moment, reminding Americans that we have survived political dysfunction before. Jon Grinspan is one of our most talented historians, with a great eye for detail. His book is clear-eyed about our peccadilloes, but also offers an uplifting message about our tendency to find our way back to democracy.” - Ted Widmer, author of LINCOLN ON THE VERGE

“Grinspan’s engaging narrative takes us from the chaos of post-Civil War America to the progressive era, showing parallels to today. Come to this book for the history lessons, but you'll leave delighted by the remarkable story of William and Florence Kelley, the stars of this show.” - Eitan Hersh, author of POLITICS IS FOR POWER and HACKING THE ELECTORATE

“Think the present-day politics of hate and fear are bad? It’s all child’s play compared to the half-century following the Civil War . . . In a highly readable narrative, Grinspan also forges some unexpected connections . . . If today’s political divisions are frightening, Grinspan’s lucid history soothes by recounting when it was far worse.” - Kirkus Reviews

“This is history at its very best: vivid, propulsive storytelling about the past and, at the same time, a vigorous and persuasive argument about the present, for anyone seeking to understand today’s political landscape.” - Adam Goodheart, bestselling author of 1861

“This compelling history of a time that mirrors our own will be enjoyed by readers interested in American history and politics.” - Library Journal (starred review)

“A welcome addition to the vast body of historical interpretations of what the Gilded Age meant for the erratic quest to fulfill the American nation’s democratic promise…Grinspan excels at teasing out the deeply rooted (and long-enduring) backstories that propelled the landmark confrontations of Gilded Age politics.” - The New Republic