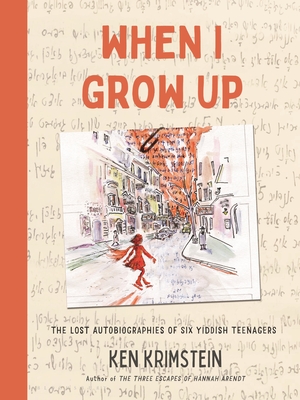 From the prize-winning author of The Three Escapes of Hannah Arendt, a stunning graphic narrative of newly discovered stories from Jewish teens on the cusp of WWII.

When I Grow Up is New Yorker cartoonist Ken Krimstein’s new graphic nonfiction book, based on six of hundreds of newly discovered, never-before-published autobiographies of Eastern European Jewish teens on the brink of WWII—found in 2017 hidden in a Lithuanian church cellar.

These autobiographies, long thought destroyed by the Nazis, were written as entries for three competitions held in Eastern Europe in the 1930s, just before the horror of the Holocaust forever altered the lives of the young people who wrote them.

In When I Grow Up, Krimstein shows us the stories of these six young men and women in riveting, almost cinematic narratives, full of humor, yearning, ambition, and all the angst of the teenage years. It’s as if half a dozen new Anne Frank stories have suddenly come to light, framed by the dramatic story of the documents’ rediscovery.

Beautifully illustrated, heart-wrenching, and bursting with life, When I Grow Up reveals how the tragedy that is about to befall these young people could easily happen again, to any of us, if we don’t learn to listen to the voices from the past.

Ken Krimstein has published cartoons in the New Yorker, Punch, the Wall Street Journal, and more. He is the author of The Three Escapes of Hannah Arendt, which won the Bernard J. Brommel Award for Biography and Memoir, and was a finalist for the Jewish Book Award and the Chautauqua Prize, and also of Kvetch as Kvetch Can. He lives and writes and draws in Evanston, Illinois.

“The New Yorker cartoonist and gifted storyteller resurfaces the long-lost stories of Eastern European youths on the cusp of World World II. It is an epic undertaking, told in tones both evocative and haunting.” - The Washington Post

“When I Grow Up is too thoughtful to lean on gathering shadows or premonitions. Instead, Krimstein focuses on the kids and their joys, their ordinariness, their hassles at school, relationships with Judaism, first romances, going to movies, dances … but what comes across is not threat or fear so much as promise and possibilities … each story drawn with a wistful impermanence that recalls Jules Feiffer.” - The Chicago Tribune

“Poignant … Ken Krimstein’s latest book sketches a powerful portrait of Eastern European Jewish youths, full of angst and optimism, on the eve of the Holocaust … Yearning is, in fact, the collection’s dominant emotion.” - Chicago Magazine

“[These stories] offer an impressively full picture of life between wartimes … It’s luck that these kids were asked to write down their stories before their world changed forever, and luckier still that the stories survived to the present day. Being able to experience them through Krimstein’s sharp prose and skillful storytelling feels like a mitzvah.” - The Arts STL

“Each story is a mix of amusement and sincerity, each showing life as it was for young people... The illustrations are roughly drawn in black and white with orange accents throughout, evoking the feeling of hazy memories while not detracting from the stories. The background of this project is just as fascinating as the stories themselves, and readers will undoubtedly feel conflicted about the innocence these stories convey while knowing what the authors would soon endure.” - Booklist, starred review

“A moving work of literary archaeology, rescuing Jewish texts from the oblivion of history … [An] excellent follow-up to The Three Escapes of Hannah Arendt, [Krimstein’s] illustrations recall both Chagall and Art Spiegelman.” - Kirkus Reviews, starred review

“Deeply affecting yet often joyful … these recovered works form the basis of Krimstein’s narrative, and the fact that almost all of the young writers perished at the hands of the Nazis casts an ominous shadow. Yet the six young people who come alive in pencil and watercolor are hopeful, defiant, lovelorn, and smart … Krimstein’s loose-lined drawings shift between sobriety and humor, while footnotes provide context … By depicting the personalities of youth lost—with easy beauty and a lack of preciosity—rather than how they died, Krimstein conveys the depth of human and cultural loss that much more profoundly.” - Publishers Weekly, starred review

“With his signature invigorating art, Ken Krimstein bridges time to connect us with these fascinating lost stories. This is a revelation and a gift!” - Noah Van Sciver, Ignatz Award-winning author of The Complete Works of Fante Bukowski

“Ken Krimstein is a brilliant graphic artist and caricaturist—but above all he is a master storyteller. His new graphic narrative on the Holocaust is destined to become a classic. When I Grow Up is one of those haunting lost stories.” - Kai Bird, Pulitzer Prize-winning author of American Prometheus and Director of the Leon Levy Center for Biography in New York

“A remarkably salvaged history brought fully to life by Ken Krimstein's humor, sensitivity, and vibrant ink drawings. These autobiographies are a rare and special glimpse into the life of six bright, bold, Jewish teenagers—artists, scholars, and activists waking up to their world just before it ignited. Brimming with details and definitions, When I Grow Up is an important contribution to the preservation of Jewish history and culture.” - Amy Kurzweil, author of Flying Couch: A Graphic Memoir

“Poignant and haunting, the stories of silenced voices are beautifully drawn back to life. These lost autobiographies could not have been found by anyone more perfect to tell them.” - Carol Isaacs, author of The Wolf of Baghdad: Memoir of a Lost Homeland

“Hitler may have destroyed the vibrant world of Lithuanian Jewry, but remnants of its literary, cultural and quotidian life were salvaged by a band of resourceful librarians and Ken Krimstein has transformed a package of those treasures for us to savor, ponder and grieve. He has taken six stories of ordinary life written by teenagers for a prewar essay contest and with inventive and poignant doodle-like drawings brought the Lithuanian Jews to life all over again.” - Joseph Berger, author of Displaced Persons: Growing Up American After the Holocaust

“Ken Krimstein's deeply moving graphic memoir is not only about Hannah Arendt. It's also, through her words, about how to live in the world, the meaning of freedom, the perils of totalitarianism, and our power as human beings to think about things and not just act blindly. Krimstein explains Arendt's ideas with clarity, wit, and enormous erudition, and they still resonate.” - Roz Chast on THE THREE ESCAPES OF HANNAH ARENDT

“Depicts Arendt in a way no other book has--bringing her passion and physicality to life using the medium of comics to distill Arendt's dense writings to their essence and to make us feel the passion of her thinking . . . intimate, immediate and real.” - The Forward on THE THREE ESCAPES OF HANNAH ARENDT

“A compelling performance with great pacing . . . both intelligible and memorable.” - Kirkus (Starred Review) on THE THREE ESCAPES OF HANNAH ARENDT

“Gorgeous . . . despite the often dark subject matter, it’s packed with wit . . . it’s a fun and, especially in a final illustration that encapsulates Arendt’s hopes for a better world, inspiring work.” - Minneapolis Star Tribune on THE THREE ESCAPES OF HANNAH ARENDT

“This is an incredible story, artfully told with exuberance, humor, and compassion.” - Deborah Levy on THE THREE ESCAPES OF HANNAH ARENDT