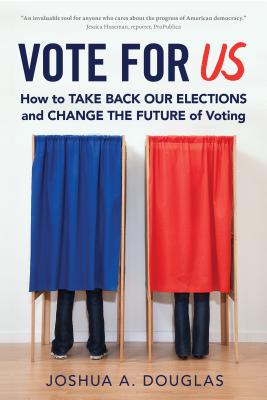 By Joshua A. Douglas
for information about purchasing this book, please contact orders@bookpassage.com

An expert on US election law presents an encouraging assessment of current efforts to make our voting system more accessible, reliable, and effective.

In contrast to the anxiety surrounding our voting system, with stories about voter suppression and manipulation, there are actually quite a few positive initiatives toward voting rights reform. Professor Joshua A. Douglas, an expert on our electoral system, examines these encouraging developments in this inspiring book about how regular Americans are working to take back their democracy, one community at a time.

Told through the narratives of those working on positive voting rights reforms, Douglas includes chapters on expanding voter eligibility, easing voter registration rules, making voting more convenient, enhancing accessibility at the polls, providing voters with more choices, finding ways to comply with voter ID rules, giving redistricting back to the voters, pushing back on big money through local and state efforts, using journalism to make the system more accountable, and improving civics education. At the end, the book includes an appendix that lists organizations all over the country working on these efforts.

Unusually accessible for a lay audience and thoroughly researched, this book gives anyone fed up with our current political environment the ideas and tools necessary to affect change in their own communities.

Joshua A. Douglas is a professor at the University of Kentucky College of Law. His most recent scholarship focuses on the constitutional right to vote, with an emphasis on state constitutions, as well as the various laws, rules, and judicial decisions impacting election administration. He has also written extensively on election law procedure. He is a coauthor of an election-law case book and a coeditor of Election Law Stories, which tells the behind-the-scenes stories of the major cases in the field. In addition, his media commentaries have appeared in the New York Times, USA Today, CNN, Reuters, the Washington Post, Politico, the Atlantic, Huffington Post, and Slate, among other outlets, and he has been quoted in major newspapers such as the New York Times and the Washington Post. He appeared live on CNN on Election Day 2016.

“This book is mandatory reading for anyone who wants to stop spinning their wheels and actually fix the dystopia that grips American politics.”

“Douglas is one of the most important voting-rights experts in the country today. In Vote for US he deftly chronicles how we can make it easier for every American to vote. An inspiring, innovative, and must-read book about how to take back our democracy.”

—Ari Berman, senior reporter at Mother Jones and author of Give Us the Ballot

“Cogent, well-written, and filled with inspiring stories, Vote for US should be required reading for those who feel that our democracy is broken. With this book, Douglas takes his place at the forefront of a growing intellectual effort to chronicle and strengthen the emerging nonpartisan Democracy Movement sweeping across the United States. Change is possible, and, as Douglas powerfully proves, it is already on its way.”

“It is easy to find books that recount the numerous ways the United States election system fails, but it is far harder to find thoughtfully considered blueprints for success. In Vote for US, Joshua A. Douglas pairs expertly interpreted explanations of our voting system with compelling stories of those fighting to make it better. This book is sure to become an invaluable tool for anyone who cares about the progress of American democracy.”

“Douglas’s ability to tell the stories of real Americans working to improve our electoral process paints a hopeful picture of our democracy. This inspiring book will leave readers optimistic about the strength of our country and the values for which it stands.”

“This book is a true Profiles in Courage of real-life democracy champions: ordinary citizens who worked in extraordinary ways to improve elections in their communities. It is required reading for anyone seeking to do their part to ensure our country fulfills its constitutional promise of one person, one vote.”

“A breathtakingly comprehensive overview of some of the obstacles we face in our democracy today. . . . leaving readers with plenty of reason to be hopeful and optimistic about the future. For those seeking to understand the modern-day challenges and voter-suppression efforts we are wrestling, this book is a must-read.”

"Douglas tells the vitally important but largely overlooked story of how grassroots activists, state and local politicians, and everyday Americans have played an important role in the adoption of positive voting reforms in this country. A must-read for everyone seeking to make our democracy more inclusive and dynamic than ever before.”