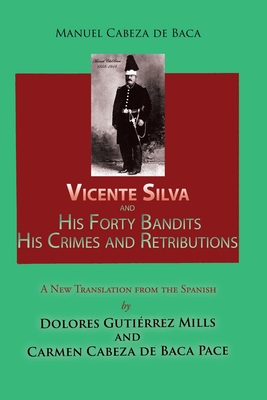 "Vicente Silva and His Forty Bandits, His Crimes and Retributions," is a new translation by Dolores Gutierrez Mills and Carmen Cabeza de Baca Pace, of a narrative written in Spanish in 1896 by Manuel Cabeza de Baca, a resident of Las Vegas, New Mexico. The chronicle depicts Las Vegas as a lawless town around the turn of the century. During Silva's unchecked reign the citizens of San Miguel County lived in fear of the outlaw and his bandits whose crimes included arson, rape, robbery and murder. Manuel was an eyewitness to the crimes committed by Silva and took an active part in the investigation of the offenses perpetrated by this gang. His treatment of life in the frontier West adds to the body of literature that prevailed in those turbulent times. The book is characterized by the exotic vocabulary used, making it a study in hyperbole as the author seeks multiple ways to express his outrage at the disrespect for human life. There are few first-hand accounts of daily life in northern New Mexico and this book adds a refreshing perspective on the character and frightening state of Las Vegas at a formative time in its history.

This new translation was originally conceived by Carmen Cabeza de Baca Pace and on her death the incomplete manuscript was taken over and finished by Dolores Gutierrez Mills. Manuel was the grandfather of Carmen Pace and the great-grandfather of Dolores Mills. Both translators were born and raised in Las Vegas. Carmen attended New Mexico Highlands University, married Howard Pace and had six children. She worked for the Highway Department until her retirement after which time she moved to Mineral Hill. She died in 2017. Dolores has a Bachelor of Arts degree in Political Science from Highlands University and a Bachelor of Science degree in Speech/Language Pathology from Towson University in Towson, Maryland. She also holds three Masters degrees: M.A. in Political Science from the University of Missouri, M.A. in Spanish from the University of New Mexico, and M.S. in Speech/Language Pathology from Loyola College in Baltimore, Maryland. She is certified as a TOESL (Teaching of English as a Second Language) teacher and taught at the Universidad Catolica in Quito, Ecuador. She worked as a bilingual speech therapist in Carlsbad, New Mexico Municipal Schools from 2000 until her retirement in 2017.